Composers Inspiration
Moods of the Sea – Moods of the Man
by Maureen Buja July 21st, 2016 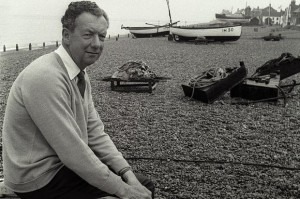 Benjamin Britten on the shingle at Aldeburgh, fishing boats behind him.

English composer Benjamin Britten (1913 – 1976) took an 1810 book of poetry written by the Aldeburgh poet George Crabbe and used it as the basis for his opera Peter Grimes. The poetry itself was presented in the form of 24 letters written in heroic couplets and includes the story of Peter Grimes. The opera changes the evil Grimes into a character who is at odds with society, even while trying to fit into it. As the first important opera in England after the war, it was an important development both operatically and musically.

The most interesting sections in the opera are when the singing falls silent and the sea has its voice. In the opera, there are six Interludes, intended as scene changes. Britten took four of these, re-ordered them, and made some revisions so they could stand alone and created the Four Sea Interludes. 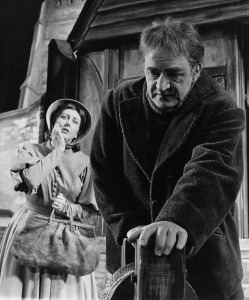 In this opera set in an unnamed grim fishing village of Suffolk (but which is commonly recognized as Aldeburgh, home to both Crabbe and Britten), the fisherman Peter Grimes loses his boy helper and becomes an outcast of the village because they suspect the boy died of maltreating by Grimes. It’s not true, but is the start of the slippery slope of suspicion and mistrust that comes to a tragic end. 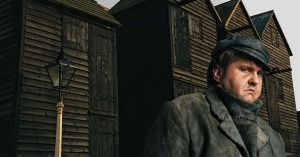 Interlude No. 1, entitled “Dawn,” occurs in the opera between the Prologue and the start of the first Act. It’s a dry grey dawn, with all the potential of the day inherent in its chords. And yet, at the same time, there’s an uneasiness that alternates with the sound of the rolling deep. On stage, the villagers are preparing their nets and boats for the day. You can hear the music in three different voices: flutes and violins have a high melody with few changes; the harp, violas and clarinets come in with arpeggios; and the rest of the orchestra is left to form ominous chords.

Britten: 4 Sea Interludes, Op. 33a: No. 1. Dawn (Royal Liverpool Philharmonic Orchestra; Libor Pešek, cond.)
The second Sea Interlude forms the prelude to the second act. It’s Sunday and there’s sunshine, birds sing, and the village attends church in a vast air of self-righteousness. Yet, behind it, there’s still an air of unease and foreboding. 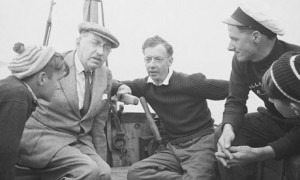 Britten at sea with the fishermen.

No. 2. Sunday Morning
The third Sea Interlude, Moonlight, comes before the third act, takes a night setting. All is calm, all is dark, and you can imagine the play of the light of the moon on the water. The water takes on an almost oily sheen as it quietly moves in the dim light. We’re never resolved, however, as the chordal structure leaves us with a sense of instability. At the end, though, sharp thoughts intrude, building us up to the fourth Sea Interlude.

No. 3. Moonlight
The last of the Sea Interludes, Storm, is actually in the opera in the first act, between scenes 1 and 2. At that point in the opera, the music of the storm is reflecting the storm within the central character: determined to do good to gain a place in society, he also wants to hold his own opinions and beliefs about his life. These are the central points that lead to his destruction. His love/hate relationship with society leads him into actions that his village will not understand or tolerate and leads to his suicide. Coming at the end of the Four Sea Interludes the turmoil in the movement shows you Peter Grimes as a character: ambitious yet self-destructive – rather like a storm.

No. 4. Storm
The Sea Interludes show us many different sides of the sea and the many facets of our ultimately doomed main character.