Artists Behind the scenes
Millie and Christine McCoy
The Two-Headed Nightingale
by Georg Predota March 28th, 2019 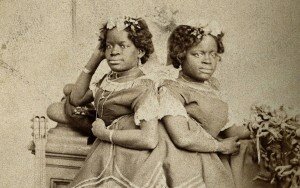 When the singing sensation Jenny Lind disembarked from the steamship “Atlantic” to begin her American tour on 1 September 1850, roughly 30,000 onlookers had gathered around the waterfront to catch a glimpse of the Swedish opera star. Her American promoter P.T. Barnum had dubbed her the “Swedish Nightingale,” and the nine-month engagement was a huge commercial success netting a whopping 21 million dollars in the modern equivalent. Inspired by Lind’s success, theatres and variety shows across the country advertised nightingales of various nationalities, but none as remarkable as Millie and Christine McCoy.

Advertised as “The Eighth Wonder of the World,” “The Carolina Twins,” and “The Two-Headed Nightingale,” the sisters were conjoined twins who even performed at Buckingham Palace for Queen Victoria in 1871. Joined at the lower spine, “the twins stood at an angle away from each other. Each sister had her own arms and limbs, although they shared a pelvis.” Born into slavery, they were sold at the age of 10 months under an agreement that paid a percentage of their exhibition fee to their parents. 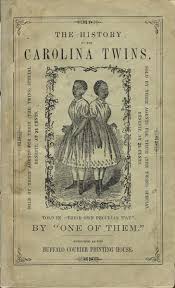 They publically appeared in circuses and roadshows as “sideshow freaks and human oddities,” and commanded an additional entrance fee just to be seen. At the age of three they first appeared at P.T. Barnum’s American Museum in New York City, and an envious showman kidnapped the twins and shipped them to England. The girls were eventually returned from overseas, and learned to read and write—including French and German—and became accomplished pianists, singers, and dancers. They continued to work in the circus scene for the next 30 years. However, they were no longer sideshow attractions, but a singing duo rebranded as “The Two-Headed Nightingale,” with Christine singing soprano, and Millie alto. Drawing huge crowds with their performances, the twins earned roughly 600 dollars a week, a near fortune at the time. They bought and retired to their ancestral farm in Columbus County in North Carolina, and published an autobiography in 1869. Millie and Christine continued to be active in “charity work for Black schools and churches in the American South,” and died from tuberculosis on 8 October 1912.