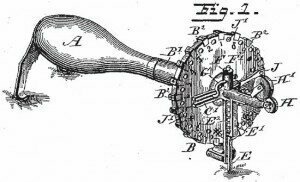 When Joseph Haydn was putting the finishing touches on a symphony during the later stages of his career, he dejectedly wrote. “The piece on which I am now working would have been already finished if it were not that my hand gets tired of setting the notes on paper. Why doesn’t some ingenious person invent a machine which would enable the afflicted composer to write the notes faster and with less fatigue?” Clearly, Haydn was asking for some sort of music typewriter. It took a bit of time, but eventually Charles Spiro invented and patented such a machine in 1885. It went into production with the Columbia Music Typewriter Company, and was advertised as the only machine of its type. “It is a compact, simple, and durable machine, and writes music the exact equal of a printed sheet. Anyone can operate it without previous instruction, and provides much better results far more rapidly than a writer with a pen. It is one of the most important labor and time saving machines ever produced for the use of professional and amateur musicians. It writes every kind of music, whether for orchestra or piano.”

So how did this miracle machine actually work? Seemingly, it was a portable device that had three disks—one for notes, one for accidentals, and one for producing key signatures and bar lines—attached to a horizontal arm. All musical symbols were located on the rim of the disks, and when rotated, the desired characters came in contact with an ink roller. The operator then placed the machine on a piece of paper and pressed down on the arm to produce the symbol. If a separate wheel was attached, words could also be printed beneath the musical characters. And a special base, designed to align at a 90-degree angle to the handle was fitted to achieve uniform spacing. Not a bad little machine for your average songwriter, but Haydn would still have mightily struggled to put an orchestral score on paper.