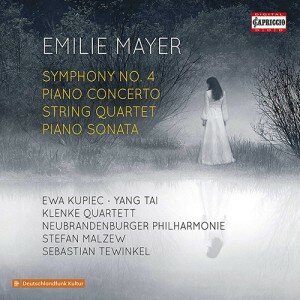 In the German-speaking area, it was Clara Schumann and Fanny Hensel that towered beyond the borders and, at the turn of the 20th century, it was Amy Beach in the USA and even more so Ethel Smyth in Great Britain that became icons of the women’s movement in music. Still hardly present is the music by the German Romantic Emilie Mayer. At the age of five, she already received piano lessons, and in the early 1840s none other than Carl Loewe in Stettin was her teacher. We encounter familiar classical form patterns, yet once more the focus is placed on the colourfulness of her music, which constantly holds new phrases and impulses ready and with which she recommends herself as one of the most important female representatives of Central European music in the 19th century.