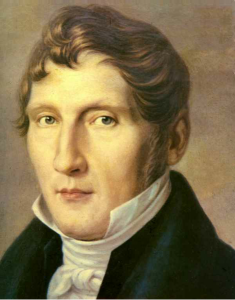 The composer and violinist Louis Spohr (1784-1859) is largely lost to us today but at his time, was as highly regarded a composer as Beethoven and, as a violinist, was compared to Paganini as a virtuoso.

Spohr admired Mozart and Haydn and hated, at the same time, the showy music of his time, particularly the kinds of bells and flourishes added by performers. He wanted substance not fluff. In January 1839, the Norwegian violin virtuoso Ole Bull gave a concert in Kassel – having recently heard Paganini in Paris, Bull added all sorts of technical tricks to some otherwise straightforward music. Spohr heard it and decided to write a piece that would ridicule the new fashion for fluff. His Violin Concerto No. 14 in A minor is given the title “Sonst und Jetzt” – “Then and Now” and compares the style of the ‘good old days’ with the current love of virtuosic grandstanding.

The Violin Concerto No. 14, is actually a concertino, i.e., composed in one movement without breaks, although there are internal divisions by tempo. Although Spohr’s violin skills had been compared to those of Paganini, there was an important difference between the two performers: as a composer Spohr was simply uninterested in being the virtuso-composer that Paganini, Wienawski or Liszt were. He originally wrote his concertos for his own use and had to satisfy himself not only as a performer but also as the composer.

Bronze profile of Paganini by D’Angers

After the Allegro introduction, the violin at 01:26 begins a minuet, forming the perfect illustration of “Then” For what Spohr heard as the travesties of “Now,” listen for example at 07:23 at the entrance of the military drum and the way that the violin takes a simple idea and augments it with little flashes that sound impressive but do nothing for the music.

Spohr: Violin Concerto No. 14 in A Minor, Op. 110, “Sonst und jetzt”(Ulf Hoelscher, violin; Berlin Radio Symphony Orchestra; Christian Fröhlich, cond.)
Spohr admired Paganini but held that the two performers should never be compared because they were so basically different. Spohr called Paganini “the leading and most outstanding singer on the violin.” The two performers held each other in mutual esteem and Paganini presented Spohr with a wax portrait relief by Pierre Jean David D’Angers that is one of the best representations of Paganini.

It’s rare that we have a piece such as this, written by a consummate master of not only composition but of the violin, that is able to look with humour on the fashions of the day and mock them, but in a virtuosic style.