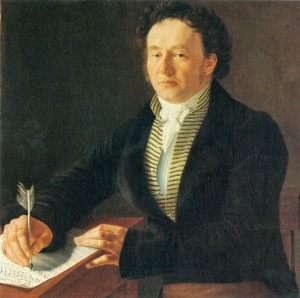 Portrait of Louis Spohr by Johann August Nahl the Younger, 1824

In the early 19th century, composers and performers started to look again at the music of earlier times. Choral societies around Germany started to look at the music of the Renaissance and Baroque, such as compositions by Palestrina and Carissimi up to Bach and Handel. Mendelssohn did a revival of Bach’s St. Matthew Passion and started an overall interest in the music of Bach. He was joined in this by the composer Louis Spohr (1784-1859) who also was a founder member of the Bach-Gesellschaft and in 1838, help organize a ‘Historical Concert’ of music by Rameau and Gluck.

At his time, Spohr was admired as much as Beethoven and later composers still regarded him as a master of both chamber and orchestral composition. In addition, he was also a consummate violinist, compared to Paganini in his abilities. As a teacher in Kassel, he taught more than 200 students in his 50 years and it is said that ‘after 1830, here was hardly a ranking Central European orchestra whose concertmaster had not been one of Spohr’s pupils. He also was a noted conductor, becoming Court Music Director in Kassel in 1822 and General Music Director in 1847.

His sixth symphony, Op. 116, has the subtitle of “Historische im Stil und Geschmack 4 verschiedener Zeitabschnitte” {Historical Symphony in the Style and Taste of Four Different Periods). The first movement, ‘The Age of Bach and Handel,’ takes its basic substance from both composes: the C major fugue from Bach’s Well-Tempered Clavier, Book 1, and the Pastoral Symphony from Handel’s Messiah.

Spohr: Symphony No. 6, Op. 116, “Historische im Stil und Geschmack 4 verschiedener Zeitabschnitte”: I. Bach-Händel’sche Periode (1720): Largo grave – Allegro moderato
The second movement, “The Age of Haydn and Mozart,” takes its inspiration from the slow movements of Mozart’s symphonies No. 38, “Prague” and No. 39.

II. Haydn-Mozart’sche Periode (1780): Larghetto
“The Age of Beethoven” looks to Beethoven’s Symphony No. 7, a work that Spohr admired more than any of Beethoven’s other symphonies. From the timpani start, we know that we are in Beethoven territory.

III. Beethoven’sche Periode (1810): Scherzo
The final movement, “The Very Latest Period,” takes a satirical shot at the hot composers of the day such as Adolphe Adam and Daniel-François-Esprit Auber, whose opera La Muette di Portici Spohr had conducted some 50 times at Kassel.

IV. Allerneueste Periode (1840): Allegro vivace
One of the problems with the work is that the first three movements are sincere homages to the great composers of the past while the last movement is a joke. Even Mendelssohn suggested dumping the last movement and substituting something that was Spohr’s own work to stand for the latest style. One writer, however, has suggested that there’s a deeper psychological reason for the joke finale. Each movement could be understood as standing for a strong point in Spohr’s life. The Bach/Handel first movement is the strong moral and Protestant basis of Spohr’s life. The Mozart/Haydn movement is the ‘ideal state’ under Emperor Joseph II. The Beethoven movement takes its core from the idea of Beethoven as Hero. The modern age, however, was one of petty tyrants and bombast. The trivial music of his day was being bemoaned by Spohr by comparing it to the great works of the past.