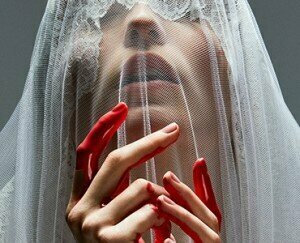 Madrid pulled together an absolute dream production of Gaetano Donizetti’s Lucia di Lammermoor, with a cast few houses could even think about.

This production by David Alden, first commissioned for the English National Opera in 2008, sets the scene in a run-down 19th century Scottish household. The monochromatic and sparse sets work wonders in setting the asphyxiating tone. The prudish Victorian black and white costumes further accentuate the oppressive atmosphere of church, family, discipline and rigour.

Alden is an activist director, and in Madrid he clearly met his match with a young cast that relished the challenge. The protagonists seize the fight scenes, they crash in through windows, they jump down from tables, they sing on their knees, they roll on the floor, they spit, they grope, they roar. And boy, they can also sing!

American soprano Lisette Oropesa, in stark contrast to her portrayal in Katie Mitchell’s recent Royal Opera House Lucia (reviewed earlier), displays a woman who is at the complete mercy of the men in her life, men who remorselessly sacrifice her sanity for their own financial and societal objectives. Oropesa has quickly become one of the most accomplished Lucias of this generation. Her rock-solid coloraturas possess flourish, style and astounding ease. Her mad scene, bloodier than most, was rendered even more haunting on account of the rarely used glass harmonica accompaniment, rather than the more habitual flute. 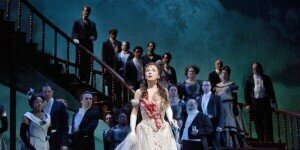 Polish baritone Artur Ruciński looks and sounds a convincing Lord Enrico Ashton, Lucia’s manipulative brother. He taunts, pushes and finally molests his sister, until he gets her agreement to marry Lord Bucklaw who has the means to restore the family fortune. Unforgettable Ruciński’s first act aria and cabaletta Cruda, funesta smania and La pietade in suo favore, sung with fervent anger as befits a brother who discovers his sister has fallen in love with an enemy. He sang with conviction, never losing sight of the embellishments, and ending with a sustained top G delivered on his knees in front of the curtain. He also proved quite the athlete, needing to repeatedly carry Lucia around the stage (lucky this is Donizetti, not Wagner!).

Javier Camarena, singing Lucia’s ill-fated lover Edgardo of Ravenswood, has emerged from a technically agile bel canto specialist to develop a voice of gobsmacking beauty, thrillingly secure high notes and delicious timbre. His final act Tu che a Dio spiegasti l’ali was supremely sensitive. The Mexican tenor even threw in an unwritten high note – just because he can. At this rate, Camarena will become a real contender for the next top tenor position. 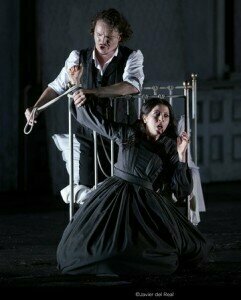 The priest Raimondo Bidebent took on larger prominence than usual thanks to the stunning bass of Roberto Tagliavini. Even the small role of Arturo Bucklaw was lavishly cast with noteworthy Chinese tenor Shi Yijie.

The chorus was well rehearsed and confident, obviously enjoying the sensible and busy direction they had received. They moved with purpose; they sang with confidence.

Daniel Oren, one of the most prolific opera conductors on the European circuit, kept the orchestra moving with verve and energy, though some weaknesses in the horns were unmissable as were occasional rhythmic challenges.

The full house repeatedly interrupted with riotous applause, and the performance received a standing ovation.