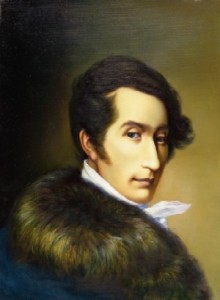 The soprano Margarethe Bernbrunn, née Lang, who frequently performed under the stage name “Adalbert Prix,” was described in the following terms. “Gretchen possessed a little plump seductive form, was about twenty years of age, and, in addition to her undoubted musical talent, was endowed with a fund of gay sprightly humor, wholly in sympathy with the youth’s own joyous nature.” Born in Munich in 1788, Gretchen took voice lessons from Franz Danzi and soon became his most celebrated student. After an engagement in Munich, Gretchen became the illustrious star at the Stuttgart opera in 1807. And only one year later, she made the acquaintance of Carl Maria von Weber, and the aspiring composer did not stand a chance! Like a bug in the headlights, von Weber was inexorably drawn to her magnetic and flirtatious personality, and she became the undisputed center of his universe! He started to neglect his family, his friends and even his professional engagement as the music instructor to the children of Duke Ludwig. Carl Maria simply wouldn’t let Gretchen out of his sight, and on 4 June 1808 he composed a musical portrait of his infatuation. 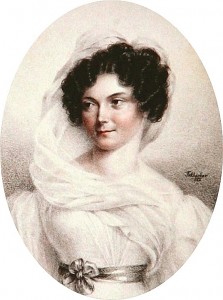 Since Weber appended the dedication, “composto per uso della mia cara amica M. L.” to his Grande Polonaise Op. 21, there really can be no doubt as to the object of his passion. There is no evidence that Gretchen had particular feelings for the composer, but that did not prevent him from trying his best to gain her affection. He started to make friends with her theatrical colleagues, and financed expensive country excursions. He organized lavish birthday parties for principal members of the opera, which generally included some kind of burlesque dramatic entertainment. One such cross-dressing variety show is detailed in a letter from Gretchen to Weber, where she summons him to a rehearsal for an extravaganza called “Mark Anthony.” The cast of this “piece of absurdity” included Carl Maria as Cleopatra, Danzi as Cleopatra’s nurse, and Mademoiselle Gretchen herself as Anthony. Another vaudeville play, mocking the heavy debts of a young spendthrift—undoubtedly alluding to the increasing financial difficulties of Weber—eventually became the subject for the charming little Singspiel Abu Hassan.

The state of Weber’s finances became more desperate from day to day. He soon became enveloped in a net of liabilities, and continued to borrow money to pay his debt. To make matters worse, Weber’s father Franz Anton—who had appropriated the title “Baron” and the “von” in his name from an extinct Austrian noble family—misappropriated a vast quantity of Duke Ludwig’s money. And thus, Carl Maria took drastic actions. In 1808 he diverted money from the ducal funds to cover his and his father’s personal debts. “To repay this ‘borrowing’ Weber then compounded the problem by obtaining a loan from the innkeeper Hönes, who lent him 1000 gulden in the belief that Weber would procure for his son a nominal court appointment that would exempt him from military service (a scheme that Duke Ludwig himself used to finance his extravagant lifestyle).” When Hönes’s son was nevertheless conscripted away and died in the war, his father lodged an official complaint, bringing to light the sale of military exemptions. Weber had just completed his opera Silvana and was leading rehearsals, when a group of policemen stormed the opera and arrested him in the name of the King. Concurrently, his father had been arrested in his apartment.

Carl Maria von Weber: Silvana, Act 1
Charged with embezzlement, participation in a corrupt draft-evasion scheme, and theft of royal silverware, Weber’s criminal trial was heard on 9/10 February 1810 by the King. The King dismissed the criminal charges—probably for obtaining Weber’s silence about the corruptions of his son Duke Ludwig—and referred the matter to the civil court. Since Weber was unable to cover his debts of about 2600 gulden, he was placed under civil arrest on 18 February. Weber did put the finishing touches on Silvana during his incarceration and on 23 February was released by the King. However, he received a lifelong banishment from the country of Württemberg! Three days later, Weber and his father were escorted to the border and unceremoniously evicted! With Weber banned, Silvana was premiered on 16 September 1810 in Frankfurt, and Gretchen Lang sang the title role alongside Caroline Brandt, the woman Weber would eventually marry.