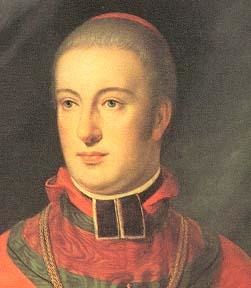 The Concerto for Violin, Cello and Piano in C Major, Op. 56 by Ludwig van Beethoven, more commonly known as the “Triple Concerto,” has not fared well with critics, scholars and audiences alike. Music critic Marion Scott suggested that the work “rouses expectations of great music it never fulfills, and that it deals out platitudinous craftsmanship that is animated by duty, not inspiration.” Along the same lines, the scholar Paul Bekker wrote, “this concerto is one of the very few examples in which it is clear that technical effort actually outweighs inspiration.” Many of these criticisms, however, are based on rather simplistic comparisons with Beethoven’s more famous solo concertos for piano and for violin. We tend to forget that the “Triple” represents a stylistic and formal hybrid, no doubt designed to accommodate three soloists. One of these intended soloists was the sixteen-year-old Archduke Rudolf, who at that time took piano lessons with Beethoven. Beethoven wasn’t the most patient teacher, and he confided to a friend, “I have only one pupil and I cannot get rid of him, much as I would like to. I must now give His Imperial Highness the Archduke Rudolph a two-hour lesson every day. This takes so much out of me that it makes me almost unfit for any other work.” As such, the flashy piano part in the “Triple Concerto” is comparatively straightforward, specifically when weighed against the formidable technical challenges assigned to the violin and cello.

Yet, even without these seemingly mitigating observations, the “Triple Concerto” represents an essential step in the compositional development of Beethoven. As Donald Francis Tovey wrote, “without the Triple Concerto, Beethoven could not have achieved the Pianoforte Concertos in G and E-flat, nor the Violin Concerto. It is in some sense a study for these works; and if it were not by Beethoven, but by some mysterious composer who had written nothing else and who had the romantic good sense to die before it came to performance, the very people who most blame Beethoven for writing below his full powers would be the first to acclaim it the work of a still greater composer.” Beethoven started work on this concerto in 1803, and he sent the manuscript to his publisher Breitkopf & Härtel in 1804. Although he described the work “as a novelty,” the publisher turned him down flat. The work was first performed in Leipzig in 1808, and finally published the same year by the Bureau des Arts et d’Industrie. In fact, the “Triple Concerto” isn’t really a concerto at all, since there is no real dialogue between the orchestra and the soloist. The three soloists carry virtually all of the musical argument. This certainly accounts for subsequent publications of the “Triple Concerto” as a piano trio.

Cellos and Double Basses provide a hushed introductory gesture for the opening “Allegro.” Rhythmically significant for the rest of the movement, this ascending figure—both melodically and in dynamic intensity—quickly leads to an unassuming and sequentially extended theme. After a short transitional passage, the thematic contrast is introduced in the strings and immediately repeated in the woodwinds. The opening theme is consequently taken by the two string soloists, and eventually sounded by the piano as well. Rapid scale passages and arpeggiation provide the means for further extension of both themes, before a formal development recasts the thematic materials once again. Beethoven opted against the inclusion of a cadenza, possibly aiming to retain the gentle communicative emphasis he had placed on soloists and orchestra. Against the backdrop of muted strings, the solo cello introduces the principle, and highly lyrical theme of the “Largo” movement. Supported by the piano, the solo strings engage in tender dialogue that includes an unexpected shift to the minor mode. Effectively, this slow movement functions as an extended introduction to the concluding “Rondo alla Polacca.” Rather than designating the inclusion of a specific Polish melody, the movement title references the characteristic rhythm of a “Polonaise.” Beethoven employs this slow dance of Polish origin as the episodic and minor-mode contrast to the sprightly and exuberant Rondo theme. A change of meter signals the start of a formal cadenza, before an energetic coda provides the sparkling conclusion.

The Concerto will be performed at the Osterfestspiele Salzburg on 21 & 28 March by the Staatskapelle Dresden with Christian Thielemann, Anne-Sophie Mutter, Lynn Harrell, and Yefim Bronfman.