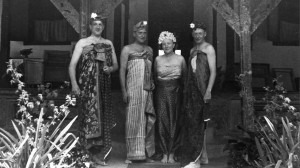 1957 was a momentous year for the Federation of Malaya. After nearly two centuries of British rule it was to become fully independent on 31 August 1957. The constitution was written, all civic and federal laws were in place, and its foreign policy and national religion well established. However, the new country was still missing two essential items. One was a flag to symbolize the new unity of its thirteen member states. But even more importantly, 2 months before the independence ceremony, it still did not yet have a national anthem. The government had not forgotten this important symbol of nation building, but it simply had found nothing suitable in its collections of folk songs. It even went as far as sponsoring a global competition, which resulted in more than 500 submissions. Alas, none of them made the final cut.

With time running short, the government finally decided to commission an important contemporary composer. And thus, Benjamin Britten was asked to put his musical acumen in the service of the Malay government. Asking a British composer to compose an anthem that celebrates its independence from Britain seems like a rather odd choice; it may simply have been a matter of urgency and of existing professional connections. And it’s not like that Britten had a special relationship with Malaysia either. During the height of the revolutionary rumbling in 1956, he had visited the country for a couple of hours. He records in a letter to a friend that “guerrillas had cut someone’s head off just a week early, and we had a taste of what it’s like to live always armed and in fear of one’s life.” However, when the government offered the considerable sum of 100 guineas for his musical efforts, Britten was apparently won over!

We are not sure if Malaysia sent Britten the words of the new anthem and in what language. What is certain, however, is that Britten struggled for a couple of days to come up with a suitable tune. In the end he produced, what he called “a curious and I’m afraid rather unsuccessful job.” The compositional strain was not lost on the Malaysian government. Within a few weeks they returned the manuscript and suggested that he’d make it sound more Malaysian. Trying to get him on the compositional correct track, they even included tapes of folk and popular melodies. Britten was not particularly impressed with the Malaysian materials; calling them “the oddest noises and the most appalling mock-Western light music” he had ever heard. Nevertheless, he submitted the final version just weeks before the scheduled independence celebrations.

Without giving a particular reason, the Malaysian government rejected Britten’s effort in favor of a cabaret tune that was already serving as the anthem of the Perak province. Britten’s composition disappeared and was never published. The composer told his publisher that although he was “infuriated,” he was “not surprised” by the decision. “I was too much in the dark over the whole matter to be able to please them,” he wrote. And that might exactly have been the point! Without being in tune with the living cultural, musical, linguistic and spiritual conventions of a community, it is almost impossible to come up with something as emotionally vested as a national anthem. Maybe Britten might have composed a more appropriate anthem for Indonesia, as he actually went through the trouble of dressing up in Balinese garb during his visit there?