Artists Behind the scenes
Losing it Onstage—When Classical Musicians Get the Giggles
by Janet Horvath July 19th, 2015 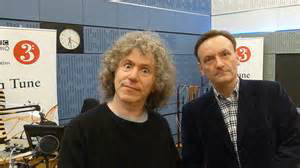 The tension and pressure onstage at Orchestra Hall is formidable. Classical musicians must maintain intense concentration to attain our lofty goal—perfection. Attempting these standards night after night sometimes results in giddiness that becomes impossible to muzzle. Soon the conductor notices, your colleagues are infected and the audience sees the tears rolling down your face. You’ve got the giggles on stage.

My father, a quintessential old world classical musician who wore suits and a tie to orchestra rehearsals during his 38-years with the Toronto Symphony, was always serious, formal and prepared. When Anthony Elliot (the esteemed cello teacher at the University of Michigan School of Music, Theater and Dance in Ann Arbor, Michigan), was paired with him on a stand my dad was quite pleased. He felt proud to be in a position to mentor Tony.

Ravel: La Valse
Ravel’s La Valse was programmed—a great favorite but like most Ravel, tricky to play. Towards the middle of the piece Ravel has written a section of extremely quick passage work that involves rapidly switching from playing with the bow, to pizzicato (plucking) over and over, back and forth with virtually no time to switch from one technique to the other. This requires an awkward bow hold and a good deal of juggling. Tony got mixed up. He was playing with the bow where it should have been pizzicato; that confused my dad and he too got off. Their bows collided spastically in mid-air. Tony started laughing, which caused him to lose his place in the music. Eventually he had to stop to muffle his loud guffaws and avoid dropping his bow. That gave my dad the giggles.

Bows, metal mutes, pieces of jewelry and batons sometimes clatter to the floor. The Minnesota Orchestra has a singular move for such occasions the “not me—I didn’t do it” salute. When something falls to the floor it always plunks loudly as the hall is designed to be super resonant. Everyone in the orchestra immediately raises his or her instrument or bow into the air indicating that no, they were not the guilty party! Conductors new to the orchestra wonder what the heck this odd behavior means. Maestros who have encountered the Minnesota Orchestra will often also raise their baton into the air to participate in the jest. 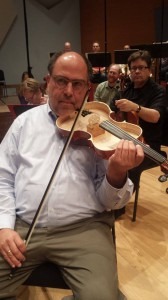 A particularly well-loved person on the podium will sometimes provoke musical jokes. Once the entire brass section of a well-known orchestra decided to play up one semitone or a one-half step off. Once the strings entered it became quite painfully obvious. The conductor, Raymond Leppard, collapsed with laughter.

An inept conductor will elicit capers from the musicians too. I remember we string players once reversed our bows holding them at the tip instead of the frog or the ebony part of the bow, to see when he might notice. He didn’t. Other times we might sing along in certain spots creating unique harmonies.

But back to unintentional snafus that give us the giggles. Recently Polish flute player Krzysztof Kaczka was performing one of his many recitals. The pianist began playing the wrong piece. First Kaczka tried to get her attention. Hesitating to disrupt the whole concert, he resisted saying, “PSSSTTT! Hey! We’re supposed to be playing another piece first.” Quickly he lunged for the sheet music of the piece the pianist had launched into grabbing it from the back of his music stand. When he noisily spread the pages open the pianist finally noticed. She vamped, repeating bars until he could enter at the right moment with his line. The page-turner had trouble stifling her tittering.

Many of us can relate embarrassing anecdotes. Cellist Steven Isserlis and Stephen Hough, pianist, were performing for Musica Viva in a long recital tour. One of the final concerts was in Newcastle. By then they were both quite worn out and Stephen H. was in an odd mood. During the performance strange melodic lines in the piano part inexplicably emerged. Steven I. had never heard it quite this way before. He prepared himself for some surprises.

They ended each recital on the tour with an encore: The Haunted House, by Steven I, which calls for narration with no small amount of levity. The piece ends with Stephen H. saying in his best ‘mother of Psycho’ voice, “It’s good to have you home my son.” Suddenly the audience was howling and Stephen H. hadn’t even uttered the infamous sentence. Steven I. looked over his shoulder at him. Stephen H. had taken the white cloth that he normally uses to wipe the piano keys and covered his head with it. He looked like a child playing peek-a-boo; laughing so hard he could hardly breathe. That started Steven I. giggling. They “honked like a couple of geese” noses twitching and eyes streaming. At last gasping for breath, in a strangled voice Steven I. tried to tell the audience, “He’s got a line!” but the line never happened as the artists were unable to control themselves. Eventually they had to straggle helplessly offstage.

The sight of two “staid” classical musicians—grown men—so totally losing it had the audience in stiches. And don’t get me started on the violas. Recently one of them went topless!