Blog
Listening to Recordings When Practising: Useful, or a Thing to Avoid?
by Oliver Pashley January 22nd, 2021 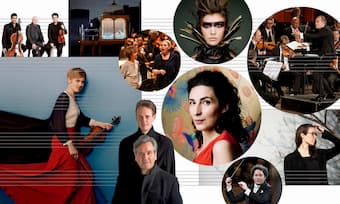 Many musicians or students start learning a piece that inspired them when they heard it at a concert or on the radio. Some famous pieces have been recorded hundreds of times, and with streaming services and YouTube out there for reference the internet has become a treasure chest full of resources for those wanting to compare and contrast performances. But how useful is this when we ourselves are learning a piece that has been recorded so many times already? Is it useful to be surrounded by a vast array of interpretations, or will it cloud our judgement and stifle our own creative voice?


Using a recording can be a great reference when we’re learning a piece – we can get a rough idea of the tempo and character of the music, and we might even notice things picked up on by that particular performer which we didn’t consider. Listening to a recording can offer us some really useful insights – but we shouldn’t forget that recordings are not a goal to work towards.

When I was younger, partly because of the comparative lack of resources and partly due to my personality, I tended to see recordings as the way things should be played. It took me a long time to shake off that feeling, to develop my own voice and trust my musical instincts. It’s fine to be inspired by a performance, but it’s equally important to know what you don’t like as well as what you do.

If you hear a great performer taking some rubato in a place where you hadn’t thought, that’s totally fine – of course, you might want to consider this different perspective and assimilate it in your own way, but if not, that’s also ok. People often talk about ‘great’ performers or ‘great’ recordings, and it’s easy to get swept up in the hype – but one of the reasons they’re great is because they are fully committing to their vision of the piece, and this commitment comes across in their playing. Of course, they all have their own inspirations and tastes too, but it is the conviction itself that makes any performance compelling. If you’re not convinced about rubato in a certain place, then don’t do it.

My advice would be: if you’re going to listen to a recording, listen to as many as you can – something which is much easier in this era of accessing music digitally at our fingertips. It’s easy to be seduced by the one you think is the best, but it’s imperative to absorb as many different opinions and interpretations as possible, and then to put all of that to one side and find out what you want to say with the piece.


Perhaps most importantly, don’t forget why you started learning the piece in the first place. It probably wasn’t to sound like that seminal recording by the famous artist. Even if you’re learning it for an exam or competition, the pleasure should come first, and comparing yourself to others isn’t why any of us play music, and certainly won’t lead to much pleasure. Use a recording if you need, but keep your distance and listen to your own voice – that’s the one that will give you your most authentic performance.