You might never have heard of the composer Léo Delibes, but I bet you are familiar with at least one of his tunes. I am, of course, talking of the “Flower Duet” from his opera Lakmé. The opera has barely started when the title character and one of her servants take a break from gathering flowers near a river. To establish the exotic local and atmosphere of the opera—Lakmé is set in India and features mysterious religious rituals and the doomed love story between a Brahmian girl and an English officer—Delibes crafted his famous duet. Throughout the duet, the priestess and daughter of the high priest Lakmé tries to erase her fears for her father’s wellbeing and attempts to enjoy the beautiful springtime with the help of her maid Mallika. This tune has become Delibes’ musical calling card and is used in TV theme songs, and in advertisements for Ghirardelli Chocolate and British Airways.

Léo Delibes started his professional musical career as a choirboy and eventual organist of Saint-Pierre de Chaillot in Paris. Simultaneously, he composed a series of light operettas. Many were written for the Bouffes-Parisiens, the theatre of Jaques Offenbach, and since these works showcase his gift for witty melody and lightness of touch, they enjoyed enormous popular success. A critique described Delibes as “restless, fidgety, slightly befuddled, correcting and excusing himself and careful not to hurt anyone’s feelings.” The natural spontaneity and straightforwardness in his character was obstructed by a certain lack of confidence. As such, his church activities represented a welcome refuge from the gaiety of the theatre. Delibes remained with his organist post until 1871, and he wrote a charming Messe brève for two-part children’s or women’s voices and organ.
Léo Delibes: Messe brève. “Kyrie” 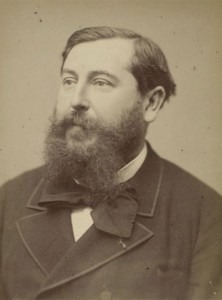 Mid-19th century France was obsessed with the sights and sounds of exotic locales. And nothing was more enticing than the song and dance forms native to Spain. We only have to think of the “habanera” and the “séguedille” sung by George Bizet’s Carmen. One year before the premiere of Carmen, Delibes carefully tapped into this French fascination. Situated on the southwestern tip of Spain, facing Morocco to the South and the Atlantic to the West lays the ancient city of Cadiz. A cultural and trading crossroads of a variety of cultures over the centuries, it inspired Delibes to compose an obsessive bolero dance rhythm that seductively pulses below a restless melody. During his career Delibes published a modest 20 songs. Trois melodies was issued by Jules Colombier in 1863, and the “Chanson espagnole,” also know as “Les filles de Cadix” became an instant hit!
Léo Delibes: Les Filles de Cadix (The Maids of Cadiz)

Gaston Leroux’s novel The Phantom of the Opera colorfully immerses us into the exciting and seedy underbelly of the Parisian Opera in the 19th century. The “Foyer de la danse” became the mingling place for aristocrats, politicians and artists. “One does not love the dance,” a contemporary critic wrote, “one loves the dancers.” For Léo Delibes, the ballet was drama without text. His sense for colorful orchestration and symphonic elaboration paired with capricious rhythms and picturesque legwork took Parisian audiences by storm. Following the rousing success of Coppélia, Delibes set to work on Sylvia, a ballet featuring a rather confusing plot staged in the ancient word. While the full-fledged production failed to make an impression, the extracted Sylvia Suite attained great popularity.
Léo Delibes: Sylvia Suite