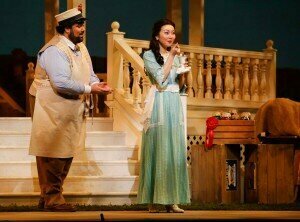 Vancouver Opera is the distinguished and well-liked company founded in 1958 by a group of visionary community leaders. They believed in the value of the performing arts in the life of a great city in Canada. Each year, it has 5 main stage productions augmented by a summer festival and outreach events to youngsters through school programs. Furthermore, it also plays (peacefully) on local Indian reservations, has an active Opera, and sponsors trip to operatic events to the Met and in Europe.

They perform at the Queen Elisabeth Theater, a, capacity modern venue in center town. And tonight, the hall was full. We are here to listen to “L’elisir d’amore”, number 13 on the list of the most performed operas in the world.

Donizetti: L’elisir d’amore: Act I: Prelude (Metropolitan Opera Orchestra; James Levine, cond.)
The composer, Gaetano Donizetti (1797-1848) completed the opera in just six short weeks … the time it usually takes an opera company to rehearse for a production. Donizetti was born to a poor family in Bergamo (which is in the Veneto, not far from Venice) in the città alta (the high city), the fifth child of six. There was no music in the family and no means for private music education, as his father was a keeper of pawn shops. He heard music only at Sunday Mass. Young Donizetti was lucky. Johan Simon Meyr, a German a cappella maestro new in town, took him under his tutelage and made sure the young chorister who showed such musical precocity continued his studies and then furthered his education in Bologna. Donizetti started writing music early (before he was twenty), first short pieces for voice then for instruments and soon joined words to music and was feverishly writing operas even before they were commissioned (all this in long hand with ink and feather…. since his Apple computer did not have good wi-fi ).

When Donizetti started composing in the 1820’s, Rossini was 35 and had stopped composing though his influence was overwhelming. The young Donizetti and the young Vincenzo Bellini (1801-1835), the two youthful genius composers who spear-headed the bel-canto era, were heavily influenced by the maestro. Donizetti understood the opportunity presented by Rossini’s departure and he would toil indefatigably to fill up the void… and fill up he did, composing some 75 operas between 1816 and 1882!

The opera was first performed on 12 May 1832 at the Teatro alla Canobbiana in Milan, with a libretto by Felice Romani. Romani based his libretto on the work Eugene Scribe had done for Auber’s opera Le philtre.

Adina (Ying Fang, soprano), a landowner’s daughter reads aloud the story of Tristan and Isolde, brought together by drinking a love elixir. She is overheard by Nemorino (Andrew Haji, tenor), the town ice cream peddler who is besottedly in love with Adina. He listens ruefully to the story, told in a beautiful aria, ‘Della crudele Isotta.’ 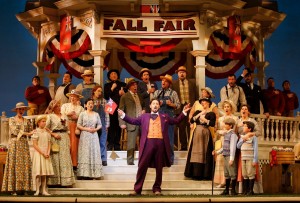 Now the army arrives, with its cocky sergeant Belcore (Brett Polegato, baritone) who falls in love with Adina declaring in his aria that there is no girl who can resist me, realized in this production in a somewhat thin voice.

Come Paride vezzoso (Leo Nucci, Belcore; Metropolitan Opera Chorus and Orchestra; James Levine, cond.)
Adina spurns the passionate declaration of Nemorino in a wonderful trio, although the protagonists are a bit too apart, followed by a duet of Adina and Nemorino (“this is how I enjoy life“).

Chiede all’aura lusinghiea (Kathleen Battle, Adina; Luciano Pavarotti, Nemorino; Metropolitan Opera Chorus and Orchestra; James Levine, cond.)
Now there’s excitement in town with the arrival of Dr. Dulcamare (Stephen Hegedus, bass-baritone). Rumors have it that he is selling “cure all” potions and a love potion, the titular elixir d’amore. The character is played with delightful acting by the charlatan doctor who combines great theatrics with solid singing.

Nemorino buys the elixir (actually cheap wine) and drinks it immediately, as Dr. Dulcamore tells him it will take 24 hours to work. Drunk, he spurns Adina and, in retaliation, she becomes engaged to Belcore.

The second act opens in the spring: a wedding banquet will celebrate the union of Adina and Belcore by Dr. Dulcamara. There’s a wonderful barcarole duet for Adina and Dr Dulcamara “Io son ricco e tu sei bella” (I’m rich and you’re beautiful).

Act II: Barcarolle for Two Voices: Io son ricco e tu sei bella (Simone Alaimo, Dulcamara; Alessandra Ruffini, Adina; Hungarian State Opera Choir and Orchestra; Pier Giorgio Morandi, cond.)
Desperate, Nemorino is persuaded by Belcore to join the army and with his payment, buys a second elixir and drinks it. News gets around that Nemorino has inherited his uncle’s fortune, but neither he nor Adina has heard this yet. Hearing of his new fortune, all the town’s girls focus their attention on him and he understands this to mean that the elixir works. Nemorino sings about the furtive tear he has seen in Adina’s eye as she watches the other girls make love to him.

Act II: Una furtiva lagrima (Luciano Pavarotti, Nemorino; Metropolitan Opera Chorus and Orchestra; James Levine, cond.)
Puzzled by Nemorino’s new popularity, Adina asks Dr. Dulcamara to explain, and so he tells her about the inheritance and the elixir, not realizing that she is Nemorino’s beloved. Adina realizes that she has wanted Nemorino, his love and his ice cream all along. Belcore accepts defeat and leaves town along with Dr Dulcamara and his phony elixir, as Adina indicates she has full confidence in her own powers of love.

Ying Fang is unquestionably the “clou “of the show with a secure warm voice, she controls the taxing vocalices, the trills, and the abundant high notes with great agility. A look at her coming engagements at the Met and the recital at Carnegie hall are impressive. No less impressive is her engagement at Verbier, the summer festival of the rich and famous in Switzerland where celebrities mix on and off stage.

Less convincing is tenor Andrew Haji who, in spite of a moving “Una furtiva lagrima, “ cannot totally carry us away and one questions if he really could have snatched Adina from the impetuous Belcore, whose singing is no less persuasive than his exploits in arms.

The stage was very economical: an ice truck, a gazebo and the paraphernalia box of Dr. Dulcamara.

In the opera chorus, I counted 20-22 singers but they seemed lost, given the large proscenium and depth of the stage.

Finally, the opera orchestra was well led by Maestro Darlington who closes 15 years of outstanding collaboration with the Vancouver Opera.

We should ask, however, about the funding – has there been a budget cut for the arts? The patrons, sponsors, supporters, and round-table volunteers number in the thousand, but how is it that the government of British Columbia has not built an opera house? Vancouver is in the middle of an incredible building boom and it shouldn’t be difficult to find some local old money or new Chinese money to support a new glorious opera house.

I am eagerly awaiting the next production of Vancouver Opera and its festival of “white nights” in the spring of 2018. The season opened with Turandot in October, L’elisir d’amore was its second production, before they go into their “Russian season” with Tchaikovsky’s Eugene Onegin and a new opera by James Rolfe, The Overcoat: A Musical Tailoring. This opera takes Gogol’s short story, The Overcoat, as mediated through Morris Panych and Wendy Gorling’s 1998 play, The Overcoat. The Russian season somewhat reminds me of the “White Nights” Festival of Gergiev in St. Petersburg. Its assorted program should attract young and old alike.