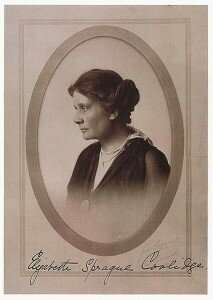 We think of patrons in music associated with the music of earlier times: Florentine lords and leaders, the Pope, or all those Russian princesses who propped up Russian composers. In America, though, it was the daughter of Chicago wholesaler who became the mainstay of 20th century composers, not necessarily American ones.

Elizabeth Sprague Coolidge (1864-1953) inherited her money from her parents and decided to spend it sponsoring chamber music. Up until this time, most of the interest in music in the US was focused on orchestral music. By bringing chamber music up in value, Coolidge brought all classical music into the spotlight. One of her longest lasting contributions was the establishment of the Berkshire Music Festival in 1918 – we know this today as Tanglewood, considered one of the top music festivals in the world. She was also an accomplished pianist. 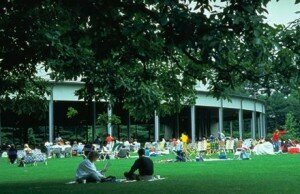 As a patron of music, she (or her Foundation) commissioned chamber music from over 180 composers from all over the world. The music was written for a wide variety of chamber music ensembles, including string quartets, and brought forth an expanded definition of chamber music for the 20th century. Just looking at three works, one by a French composer, one by a Hungarian composer, and one by an American composer, shows the breadth of Coolidge’s effect on chamber music.

A work such as Arthur Honegger’s Concerto da camera (1948), was written for the combination of flute, English horn, and string orchestra. Coolidge had requested a work that would feature the English horn as soloist (a rare occurrence). Honegger had the voices each take their own route – they aren’t in imitation of each other as much as they are in counterpoint to each other.

Honegger: Concerto da camera III Vivace (Heinz Holliger, oboe; Aurèle Nicolet, flute; Academy of St. Martin in the Fields Orchestra; Neville Marriner, cond.)
Hungarian composer Béla Bartók was commissioned in 1934 to write a string quartet and he responded with his String Quartet No. 5. The second movement is a lovely example of Bartók’s ‘night music,’ a sound world of ‘eerie dissonances providing a backdrop to sounds of nature and lonely melodies.’

Bartók: String Quartet No. 5, BB 110: II. Adagio molto (Emerson String Quartet)
In 1970, at the 14th Festival of Chamber Music, one work in particular astonished the audience. American composer George Crumb’s Ancient Voices of Children, a setting of poetry of Federico García Lorca about the death of a child, was sung by mezzo-soprano Jan DeGaetani and boy soprano Michael Dash. Crumb wrote the work for DeGaetani, who was already famed for her extended vocal techniques.

Crumb: Ancient Voices of Children: No. 4. Todas las tardes en Granada, todas las tardes se muere un nino (Each Afternoon in Granada, a Child Dies Each Afternoon) (Jan DeGaetani, mezzo-soprano; Michael Dash, boy soprano; Contemporary Chamber Ensemble; Arthur Weisberg, cond.)
Other composers, such as Stravinsky and Copland, were commissioned by Coolidge and her foundation, and the story of those works has been told elsewhere.

In the hundreds of works she commissioned and the composers she assisted, Elizabeth Sprague Coolidge changed the world’s conception of chamber music from something small and marginal to a genre that has become seminal and capable of important statements. No other individual has matched her vision and or support for the arts.