Directed by Nicolas Simon, La Symphonie de Poche (‘Pocket Symphony’) is a unique collective of musicians dedicated to presenting new arrangements of familiar works, often in unfamiliar settings. The lineup, including harp, marimba, clarinet and baritone saxhorn (a cousin of the euphonium), creates unique sonorities and offers fresh interpretations of existing pieces. I talk to Nicolas Simon about the ensemble’s unique identity.

What was the initial idea behind La Symphonie de Poche?

While I was studying to be a conductor, I had a desire to make the music that inspired me every day as accessible as possible. I said to myself that, as artists, if there were fewer of us on stage I could share the music in more places, places where it hadn’t been before, with people who’d never experienced it.

Where does the name come from?

Since I was very young, the word ‘symphony’ fascinated me! Historically, it can mean either the name of a piece, or a group of people. As a young apprentice, I dreamt of conducting all the symphonies in music’s history.

Later on, I said to myself that the word ‘symphony’ would be a nice name for an ensemble. The ‘De Poche’ [pocket] comes from my desire to make the music accessible: something you can always have on you, something you can transport, wander around with, keep… in your pocket.

What is unique about your ensemble?

The main uniqueness of the ensemble as it stands today is due to the encounter of unlikely instruments that never normally play together: string quintet, marimba, harp, baritone saxhorn, accordion… it results in a very individual, never-before-heard sound which forms the core of the ensemble’s identity.

You play arrangements of existing pieces. Have you ever commissioned a new work for your ensemble?

What do you try to discover in doing an arrangement for your ensemble? What new ideas do you aim to show?

I don’t look for anything new to say. The arrangement is the DNA of the project. It is its energy, its essence. It allows the instruments that make up the ensemble to bring together different universes.

Practically speaking, it gives us a repertoire which wasn’t written for us originally. It is our passport to pieces that we choose to present in our programmes. The arrangement is, before the interpretation, our creative gesture and our signature. It is our way of bringing music to people. 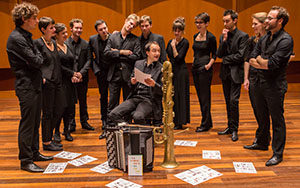 What do you find different about playing in different sized halls?

There are obviously differences between playing in a concert hall and a more intimate or unusual space. A concert hall brings with it the comfort of a more sympathetic acoustic, although often we are surprised by more unusual spaces.

The more intimate space, on the other hand, puts us more directly in contact with the (often smaller) audience, who can also be seen by the musicians who are playing. There is therefore a more personal dimension to playing in an unusual space. However, the atmosphere of a large and ‘anonymous’ audience is also very nice. For a healthy artistic practice, one needs to perform in both types of space.

Is there a unique atmosphere when you work with this small group, a camaraderie among the players?

Yes, without a doubt! (As is undoubtedly the case in many other ensembles.) I am lucky to be surrounded by musicians who are often also friends, who I knew in other capacities, from other projects and who chose to come and join La Symphonie de Poche. It’s resulted in a strong link of friendship which is extremely precious in this work.

Also, as we are a smaller group, whenever we rehearse, I don’t stand on a podium as I would with a symphony orchestra. I talk to each person individually. The professional relationships sometimes become very intimate with the musicians in the group. They are constantly exposed to demanding scores which relentlessly test their limits. This sort of fragility unites us and makes us very empathetic to each other.

Do you notice a difference working with La Symphonie de Poche, compared to a chamber or symphony orchestra? 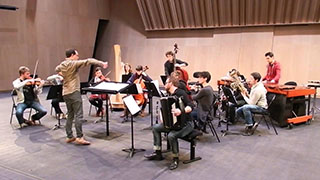 Of course! When I work with other ensembles the mindset is very different, although different doesn’t mean better or worse! As I mentioned, I don’t talk to these musicians in the same way as with other groups. In front of a larger orchestra, I talk to people in a more ‘collective’ way. Chamber or symphony orchestras have their own identities, their own lives, their specific administration, their own rhythms, all of which feed into how they relate to their own principal conductor and guest conductors.

Where do you imagine La Symphonie de Poche in the future?

Where it is now: continuing, every day, to take shape in the musical landscape. I have projects in my mind for the next three or four years, but not necessarily a large development plan! I see a long line into the future, open to the unexpected murmurs of the present; if I look at things long-term, I wish the ensemble to remain grounded and attentive to the present times. Beethoven, Boris Vian, Wagner, mélodie [French art song] and lots of other ideas are already in the works!