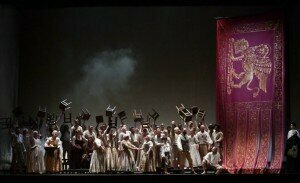 P: “May I get a ticket for Emilia-Romagna?”

P: “The city of Emilia-Romagna.”

CASHIER: “Signore, Emilia-Romagna is not a city! It’s a region!!”

I had asked for two tickets for La Gioconda, Sunday at 9 p.m. The Valli theatre in Reggio Emilia was a short walk from my hotel and I decided to go there after dark.

Maybe my invitations were at the box office. There was a lot of movement as I neared the theater. Probably another show earlier to use up all the “dead time” in this season of “crisis” present In Italy. 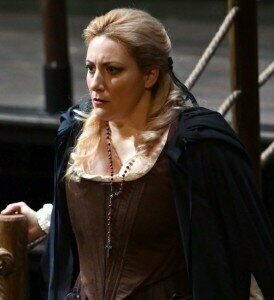 At the theatre entrance I was stopped: “Dove?”.

I replied: “I would like to pick up my tickets from the box office for La Gioconda for tonight.” The cashier told me: “Stasera? But the opera started one hour ago, Signore”.

“I am etc. etc., please call the manager”. She said: “Oh, mi dispiace, mi dispiace, no places in parterre for journalists. We will take you to the loggione….” The loggione is the top balcony, usually filled with students, pensioners, and opera lovers. They are the ones who create havoc, rightly or wrongly.

La Gioconda was given its debut at La Scala in 1876 with a script by Arrigo Boito, based on Victor Hugo’s drama Angelo, tyran de Padoue (1835). Ponchielli was 42 years old and the debut was a triumph.

The decidedly Italian composer had a weakness for French genius, as did others (Verdi’s Rigoletto was based on Victor Hugo’s play “Le Roi s’amuse” and Rossini’s The Barber of Seville on a play by Beaumarchais).

Earlier in his career Ponchielli had been refused the music chair at the Milano Conservatory. He was in good company…. A few years earlier the Milano conservatory refused even to admit a young candidate from the small peripheral town of Roncoli in Emilia-Romagna. His name was Giuseppe…Giuseppe Verdi. 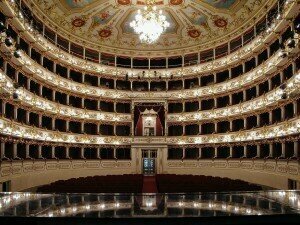 Back to La Gioconda. The story opens in the ducal palace in Venice. Each act has a separate title.

Act I: The Lion’s Mouth.

Gioconda, a famous singer, accompanied by her blind mother, has just refused the advances of Barnaba, a spy in the service of the government; she is trying to find Enzo, her disguised lover, banished from Venice.

Rejected, Baranaba accuses Gioconda’s mother of witchcraft and only the intervention of Laura, wife of the powerful inquisitor, Badoéro, saves her from the stake; in gratitude, Gioconda’s mother gives Laura a rosary.

Barnaba arranges a meeting between Laura and Enzo, who are old lovers, and leaks the meeting to Badoéro.

Laura and Enzo plan their flight, meeting on his ship. Left on deck alone, Laura is threatened by Gioconda who has plotted to kill her out of jealousy. However, recognising the rosary given to Laura by her mother, she decides instead to save Laura and facilitate her flight with Enzo. Enzo returns to find Laura gone and his enemies approaching. He burns his ship and dives into the lagoon to escape.

Act III: The House of Gold

Badoéro has captured his runaway wife and orders Laura to drink poison in punishment for her betrayal but Gioconda changes the poison to a strong anaesthetic. A party scene, with the famous Dance of the Hours, is interrupted by a funeral bell and the body of the senseless Laura is seen. Enzo reveals himself and is promptly arrested.

To free Enzo from prison, Gioconda promises herself to Barnaba (Tosca! Scarpia!). When Enzo arrives, he sees Laura’s body and is furious with Gioconda, until he hears Laura’s voice and realizes that she hasn’t died. Before fleeing, the two lovers bless Gioconda.

Barnaba arrives to get his pound of flesh but Gioconda falls on her dagger and dies, just as Barnaba tells her that he has drowned her mother.

It is surprising that with such a wonderful world-class cast, the programme didn’t include any information about the singers beyond their names. Surely, we could have been spared the interesting and illuminating stories about Boito, Victor Hugo, and Venice and get a few notes about the living among us.

Saioa Hernández was a superb Spanish Gioconda in all senses, with superb colours to her lyric soprano, superb phrasing, a superb high register, and a superb hushed pianissimo.

Her performance was exquisitely moving, especially when dangerously preying on her rival Laura and then gracefully dying.

Enzo (Francesco Merli), her lost lover, is a consummate tenor, singing with great culture, with much control, and a delicate pianissimo, making his debut in the role.

A dramatic mezzo with a major career to her name, Anna Maria Chiuri (Laura) was not always as excellent as her rich past would indicate.

The Badoéro of Giacomo Prestia is a familiar role for him; a forceful basso, he made an ideal inquisitor: dangerous, weighty, and menacing.

The other cast participants and the choir all get marks of excellence. 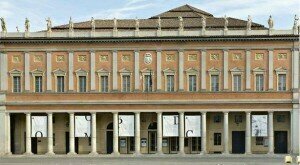 The orchestra was large: I counted at least sixty instrumentalists, all outstanding, with special mention to the cellos for their solos in the ballet intermezzo.

Maestro Gualtieri knows La Gioconda by heart; he sang along with the coro and the soloists, gave them cues, held their long notes, and generously held the orchestra until the applauses finished.

Teatro Valli was built in 1857, seats 1,150 and is a well- (or badly) kept secret for its size, beauty, acoustics, and decoration. It lacks nothing compared to its famous sisters in Bologna and Parma (the other two great opera houses in the region! of Emilia Romagna).

The main floor and the five richly decorated balconies were full. From the loggione close to the beautiful affreschi and chandelier, I was taken after intermission to a box in the first balcony where I could be close to the conductor Gualtieri, the Bucca (that yawning mouth where the orchestra sits in the pit), and the 60-member Orchestra – a treat.

We shouldn’t forget that Luciano Pavarotti sang Rodolfo in La bohème at the Teatro Valli on April 24, 1965, and nobody forgot it. Four days later, he sang that role in his La Scala debut.

A word about the inventive stage: it was surrounded by water, fortunately shallow, since the singers had to wade through.

Luckily, it’s already spring – how are we to manage this in a bitter winter is a huge unsolved question for the Reggio Emilia opera…. It splendidly solved all the other possible problems.

So now you have to go for yourself to the region of Emilia Romagna and the splendid Teatro Valli.

And to entice you more, you can also look forward to an epicurean meal in one of the many nearby restaurants.