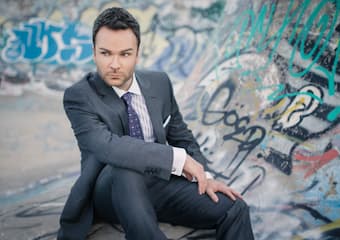 Canadian Baritone Joshua Hopkins has developed a career as one of the leading young singers of his generation, performing regularly at the Metropolitan Opera, Houston Grand Opera, and the Lyric Opera of Chicago. Growing up in a family where musical theatre was the order of the day, he found his way into opera through an encounter with Haydn’s Creation, inspiring him to study at McGill university. Since then, he has gone on to grace opera stages both nationally and internationally, recently making his debut as Harlequin in Ariadne aux Naxos at the Edinburgh International Festival.

In 2015, Joshua’s sister was killed by an ex-partner who murdered her and two other women on the same morning. This horrendous event inspired Songs for Murdered Sisters, a collaboration between Joshua, composer Jake Heggie and author Margaret Atwood. A filmed performance was made, the restrictions on live shows making an in-person premiere impossible, and Joshua talks to me about this project, as well as his early career and current relationship to art and music.

What inspired me to start singing, and even identify that my voice could carry a tune, were the original London soundtracks of both Phantom of the Opera and Les Miserables. My parents bought both cast recordings and were incessantly playing them. I was listening along with them and knew all the words by heart! My parents and I took a trip to Toronto to see the Canadian cast perform Les Mis, and when the touring production went around Canada we also saw it in Ottawa. I would say those performances and the cast recordings really inspired me to start singing.

My parents owned a Hammond organ, so I had some keyboard skills. Realising I could sing led to me starting to accompany myself at school functions, awards ceremonies, graduations – and that got the ball rolling on singing and wanting to perform.

I remember being at a crossroads in my late teens, wondering if I should pursue musical theatre. […] Around the same time I was singing Curly in Oklahoma I also sang my first classical piece, which was as Raphael in Haydn’s Creation. In a way I was torn – my heart was much more in [musical theatre], I had never heard an opera before I went to university. My experience singing The Creation made me think there was a germ of something there to pursue.

My parents were very supportive of me, auditions went well for different universities, and I ended up choosing McGill. Their programme was very geared towards opera, so I suddenly found myself a fish out of water in Montreal, immersed in this very operatic training. I came to understand that opera is the melding of all these arts – it is musical theatre, it is dance, lighting, sets, costumes, drama, characters and excitement, and it is gorgeous music. It’s this very deep well of artistry, and I would say at that point it was pretty clear to me what I wanted to do with my life.

Which role[s] do you feel the most comfortable with? 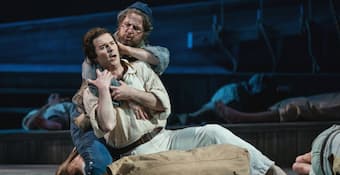 Billy Budd is a role that is very near and dear to my heart. I have a particular fondness for Benjamin Britten to begin with, because I think he really is able to go so emotionally deep in his music and to some of those very troubling and disturbed emotions, and with Billy Budd, there’s such innocence to that character, I really feel a kinship with [Billy].

Is there any repertoire / role you haven’t performed yet that you would like to in the future?

At the time, I knew that the Met was bringing their beautiful production [of Billy Budd] back after many years, and they had cast me as Billy, which would’ve been my first title role there. That production was supposed to have been this May and June, and of course that got cancelled. That was by far the most devastating cancellation I had to face. Britten’s writing for the voice is incredibly knowledgeable and challenging, but not in a strange outlandish way. It makes sense, from a baritone perspective, so it fits me like a glove. I hope that my days with Billy aren’t numbered, but doing it [at the Met] would’ve been a huge thrill.

Is there a particular role that you’ve really felt your relationship with change over time (for better or worse)? 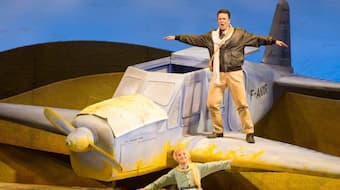 I don’t feel like it’s changed necessarily, but if anything, the roles that I’ve had the privilege of doing multiple times have grown significantly and grown deeper as I continue to revisit them. The work that I continue to do with my voice teacher, Dr. Stephen King, helps me to have a much more confident and free singing sensation as I continue to work on these roles, which is wonderful, allowing me to go deeper in the emotion, in finding new things as part of the performance.

There is one role that comes to mind that I felt there was a huge change, and it really had to do with life experience, and it’s a role I’ve only sung twice: the role of the Pilot in The Little Prince by Rachel Portman. The first time I sang it was in 2004, when I was in the Houston Grand Opera Studio – it was an incredible opportunity to be given a leading role in a production. Fast forward eleven years later – it was very shortly after my sister’s murder. At the end of the opera, the character of the Pilot loses the Little Prince, he goes off into his kingdom, and there’s a great sense of loss for the pilot. I really had this visceral reaction that was totally stemming from the deep personal loss that I had just suffered. […] Our life experience really infuses how we interpret characters but also how we interpret music.

Tell me about your project Songs for Murdered Sisters.

It was an incredible experience and a very powerful project that was five years in the making. It’s been a huge help to bring meaning to all of it. An act of violence like that where one man basically went on a killing spree, not only killing my sister, but on the same morning killing two other women who had previously had relationships with him, those kind of events on that scale don’t really take place in Ontario.

Events like this do happen and they happen way more often than we like to believe. For it to hit so close to home was a real eye-opener for me, and almost immediately after my sister’s murder my wife and I approached the National Arts Centre Orchestra [in Ottawa] to see if they’d be interested in commissioning this new work. What Margaret wrote first with her song texts, and then Jake fleshing them out with his gorgeous music – I’ve shed so many tears from their work, [from] how they’ve gone deep into their own souls to flesh out this idea of grief and loss and how it impacts all of us, and how we process that.

It’s helped me to process my own emotional response to my sister’s murder, a lot of which was numbness for many years, because it’s impossible to really understand and comprehend that something so violent can take place in a home that I’d visited in the past and seen my sister and her children in happy times.

It’s also inspired me to speak out against violence against women and to hope to spread the word about what people can do to try to be activists in this situation. I felt very powerless when it happened and the only way I really knew how to respond to it, apart from being with my family, was to create some kind of artistic response to it, and to bring awareness to the subject of violence against women and gender-based violence, but also to tell my sister’s story and reach the hearts of some people whose minds need changing in the world.

Songs for Murdered Sisters (Version for Voice & Piano): No. 6, Lost

Joshua partnered with the White Ribbon campaign in Canada, who supported his Songs for Murdered Sisters film. Joshua created the hashtag #WhiteRibbonSisters, and is advocating for 10,000 men to take the White Ribbon Pledge, ‘helping people to think actively about what they can do in their lives to bring awareness and hopefully change some other hearts and minds […] and raise their voices to speak out against all forms of gender-based violence.’