“The Transformation of American Piano Making” 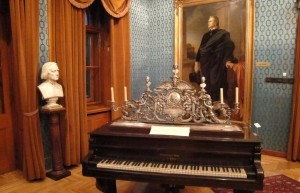 Some inventions completely revolutionize the further development of an instrument. Take for example the 1837 worldwide patent registered by the Boston piano manufacturer Chickering & Sons. They introduced the first practical casting of a modern iron frame built to sustain the great tension of the strings of the piano, so the instrument could stay in tune for a considerably longer period of time. And in 1845, they secured an additional patent for the first practical method of over-stringing for square pianos, with the patent applied to uprights in 1849. These innovations almost immediately became standard features with all other piano manufacturers!

Innovation certainly had been on Jonas Chickering’s mind when he founded the piano company in April 1823 in Boston. A cabinetmaker by trade, Chickering underwent an exacting 4-year apprenticeship, and his small but prosperous company produced 47 instruments a year by 1829. From the very beginning, Chickering pianos were known locally for their superb design and craftsmanship, and Chickering aggressively sought to expand his market. To that effect, he made the experienced merchandiser Captain John McKay a partner in the company. McKay succeeded in opening up the market not only throughout North-, but also across South America. This rapid expansion was made possible by employing production strategies that paralleled developments in other trades undergoing industrialization. Richard Parker writes in a 1854 article, “When he first commenced business for himself, about 15 instruments a year were turned out while in the later years Mr. Chickering’s business finished between fifteen and sixteen hundred instruments a year, and at least one grand piano—worth about a thousand dollars—every week.” By the middle of the 19th century, Chickering was the largest piano manufacturer in the United States.

Famously, Chickering supplied the instrument for the extended concert tour of the United States—in all totaling 93 performances—for the “Swedish Nightingale” Jenny Lind. In 1853, a large fire swept through the piano factory, with the new factory located in the South End of Boston described as the “largest building in the United States outside the U.S. Capitol.” Regrettably, Jonas Chickering never saw the completion of the structure as he suffered a stroke and died 8 December 1853. The business passed to his sons, and it continued to win top awards at home and in Europe. In all, the Chickering piano manufacture garnered over 200 significant awards over the years. The Chickering piano also received a glowing endorsement from the greatest pianist of all times. Franz Liszt was testing one of the Chickering instruments and exclaimed, “It is Imperial! I never thought a piano could possess such qualities.” And Edvard Grieg praised the instruments with the words, “The glorious Chickering.” By the way, the Chickerings used by Franz Liszt are preserved in the Liszt memorial collections in Weimar and the Royal conservatory in Budapest.

However, competition with the newly arrived Steinweg family was fierce, and by the 1860’s Chickering was loosing ground to the Steinway Company. Chickering continued to produce quality instruments for several decades, but the American Piano Company purchased it in 1908. They continued to manufacture pianos in Boston until 1927, before the plant was relocated to East Rochester, New York. By 1932, the company became part of the Aeolian American Corporation, which was acquired by the Wurlitzer Company in 1985. In turn, the Baldwin Piano Company purchased Wurlitzer, and after declaring bankruptcy it was sold to Wurltech Incorporated. By all accounts, the Chickering pianos produced up until WW2 were famous for their clarity of sound and a thundering bass. Maybe that’s why Glenn Gould purchased a Chickering Baby Grand, manufactured in 1895. Gould wrote, “It is quite unlike almost any other in the world, an extremely solicitous piano with a tactile immediacy almost like a harpsichord’s. It gives me a sensation of being so close to the strings and so much in control of everything, whereas modern pianos seem to have power-steering – they drive you, instead of the other way around.” How’s that for an endorsement!