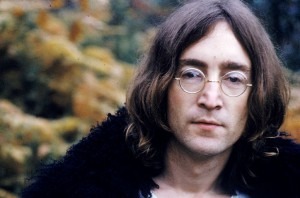 John Winston (later Ono) Lennon was born on 9 October 1940, in Liverpool, England, to Julia (Stanley) and Alfred Lennon, a merchant seaman. When his parents separated, 4-year-old John ended up living with his Aunt Mimi. John showed some early aptitude for music, and learned to play the banjo and the piano. Artistically talented, John was a troubled child, and the death of his mother in a rogue traffic accident was one of the most traumatic events in his life. Under the influence of Elvis Presley’s meteoric popularity, 16-year old Lennon formed his first band, “The Quarrymen.” He soon invited Paul McCartney to join the group, and the two eventually formed one of the most successful songwriting partnerships in music history. The band, now including George Harrison, changed its name to “The Beatles,” and Brian Epstein officially discovered the formation in Liverpool’s Cavern Club in 1961. With Ringo Starr as the new drummer, and George Martin as producer, the group released their first single, “Love Me Do,” in October 1962. Lennon wrote the follow-up single, “Please Please me,” which topped the British charts, and “Beatlemania” was born!

The Beatles became a worldwide phenomenon after an appearance on “The Ed Sullivan Show” in the United States. Even Queen Elizabeth II of England got involved and named the Beatles “Member of the Order of the British Empire.” John and the Beatles toured extensively until 1966, when Lennon’s statement that the band was “more popular than Jesus” caused a public uproar. Instead of appearing live, the band devoted itself to studio work and released highly popular “pop clips,” essentially early versions of music videos. But all was not well, as their film “Magical Mystery Tour” failed to achieve much commercial success. Subsequent releases were plagued by mismanagement, and Lennon’s artistic partnership with second wife Yoko Ono caused serious tensions within the group. Their single “Give Peace a Chance,” recorded under the name “The Plastic Ono Band” in 1969, became a national anthem for pacifists. Lennon’s relationship with McCartney, however, descended into animosity. The days of the Beatles were numbered with the group officially disbanding in April 1970.

In 1970, John Lennon released his debut solo album based on “primal-scream” therapy, but it was “Imagine,” recorded in 1971, that became Lennon’s most commercially successful post-Beatles effort. Lennon and Ono moved to the United States in September 1971, but a government vendetta led by the Nixon Administration resulted in a four-year legal battle. Although Lennon continued to perform and release hit albums, and famously collaborated with David Bowie and Elton John, his marriage to Ono was falling apart and the couple separated in 1973. Reconciled in 1974, Ono gave birth to Sean Lennon and John took an extended break from the music business. In 1980, John Lennon returned to the musical stage with the album “Double Fantasy,” but only a few weeks after its release, a deranged fan lethally shot Lennon in New York City. His violent death marked the sudden and tragic end to one of the most talented singers and musicians of the 20th century. During his solo career, John Lennon wrote at least 105 songs. He is also co-credited with Paul McCartney to have penned 203 songs for the Beatles, although that number is still hotly contested between Yoko Ono and Paul McCartney. Following his tragic death, Lennon has become a modern-day secular saint, a divine guru of peace and love. That image, however much laced with historical revisionism, appears to have been primarily cultivated by his widow Yoko Ono.