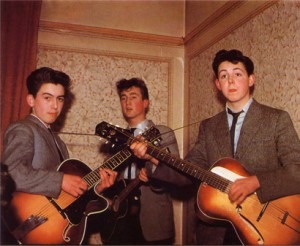 The musical genre called “Skiffle” originated in African-American culture in the early 20th century. Drawing its influences from jazz, blues, and folk, it usually featured poor musicians using homemade or improvised instruments. Washboards, jugs, cigar-box fiddles and comb-and-paper kazoos accompanied more conventional instruments, like acoustic guitar and banjo. Originally, it simply described informal jam sessions in a rented house where everybody would participate in the process of music making, no matter how talented. The underlying message was simple. Anyone can play these songs, and you don’t need proper training or fancy instruments. The 1940’s saw a substantial number of recordings with colorful song titles like “Hometown Skiffle.”

The term “skiffle” all but disappeared from the American music scene in the late 1940’s. However, it made a huge comeback in the United Kingdome in the 1950’s. An estimated 30000 to 50000 skiffle groups performed in Britain at that time, and a large number of British musicians started their careers playing skiffle. Among them Van Morrison, Ronnie Wood, Mick Jagger, Roger Galtry, Jimmy Page, Ritchie Blackmore and Graham Nash. Skiffle became not merely a national phenomenon; it also formed the link between archaic American jug band blues and modern rock’n’roll. In March 1957, a 16-year-old lad from a broken home in Liverpool formed his own skiffle group. John Lennon originally christened the group the “Blackjacks” but quickly changed the name to “The Quarrymen.” They played at birthday parties, and on a stationary flatbed truck at outdoor parties. Lennon soon recruited the 15-year-old Paul McCartney to join as rhythm guitarist, and the 14-year-old George Harrison became the lead guitarist. With Colin Hanton on drums and John Lowe on piano, the group entered a recording studio on 12 July 1958. On this day, “The Quarrymen” would cut the so-called first “Beatles” record.

The Quarrymen: That’ll be the Day

The Quarrymen: In Spite of all the Danger 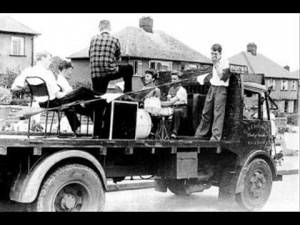 The group had decided to record an interpretation of “That’ll be the Day” as one of their songs. Written by Buddy Holly and first recorded by the “The Crickets” in 1957, the original single would sell over a million copies in the US alone. After some discussion, “The Quarrymen” decided to also include their original song “In Spite of all the Danger” on the same record. On the recording, it was sung by John Lennon and credited to McCartney/Harrison. McCartney, however, recalled, “It says on the label that it was me and George, but I think it was actually written by me. We were mates and nobody was into copyrights and publishing, and nobody understood…So you can imagine that publishers saw us coming!” At that time, Lennon and McCartney also started their artistic collaboration, and “Like Dreamers Do” became a hit for “The Applejacks” in 1964.

In 1957, John Lennon composed his first song “Hello Little Girl.” He based the composition on songs by Buddy Holly and Cole Porter that his mother had sang to him. According to Lennon, “it was all very Freudian.” Eventually, the “Beatles” unsuccessfully used this song at a Decca audition in 1962. The Merseyside band “The Fourmost” picked up the song in 1963 and made a recording at Abbey Road Studios. It would reach number 9 on the United Kingdom pop charts; but by then, Beatlemania was in full swing.

John Lennon would soon become one of the greatest figures in popular music during the 1960’s. And, he would follow up with a highly adventurous and eclectic solo career. More on this in our next episode!