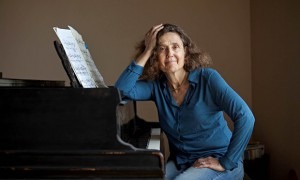 At the age of 19, a promising pianist named Sara Solovitch, struggling with nerves, decided to turn away from her ambitions as a professional musician. Since then she has led an active and varied career as a journalist across the USA, and in her latest book, Playing Scared, Sara challenges herself to come to terms with her stage fright and get back onto the concert platform one last time, and in telling that story she unflinchingly explores the strange, unforgiving world of performance anxiety. It’s a brave and compelling book, and I got in touch with Sara to ask her about it.

Having gone through this journey, are your views on stage fright different to before you began?

When I set out, my goal was very specific. The idea was to spend a year looking at the science and psychology of performance anxiety, work with great teachers, hunt down every remedy I could find, and then at the end of the year give a performance to prove that I could do it. Then midway through the year, something shifted. It became about my relationship to music. I realized that I wanted to communicate the love I felt when I played. It became less about not making mistakes and more about letting go – it became about focus and deep concentration or centering. What I ended up seeking was not so much a test as what my teacher refers to as reaching for the stars, and occasionally, just occasionally, I touched them.

I was particularly interested in the relationship you explore between the mental and physical aspects of stage fright. Did gaining a greater understanding of those elements help you in your journey?

I tried so many different things that it’s hard to winnow out what exactly helped and what didn’t. Sometimes I felt like Steve Blass, the pitcher for the Pittsburgh Pirates who in 1973 woke up one morning and discovered that he couldn’t throw to first base. Ultimately, the most important thing for me was just doing it. It sounds so simple, like that Nike commercial: Just do it! But for someone who’s spent her life running away from performance, it was critical. I discovered that I couldn’t wait for the symptoms to appear before taking control – by then, it was way too late. It’s shocking how fast it happens. One thing that helps, of course, is extreme preparation. In his memoirs, Winston Churchill, who suffered from public speaking anxiety, claimed that he averaged an hour’s preparation for every minute of a speech.

One of the most striking things I found about the book is the cross-referencing to other fields, especially sport. Do you think developed society place performers in all fields under too much pressure?

I do think that in our society, there is a kind of respect or deference paid to those who appear fearless. Fear is seen as weakness and no one wants to be party to it, much less pay good money to see it. I think musicians are especially vulnerable – especially in classical music, which begins at such an early age. A parent’s involvement goes without saying, and the parent’s presence becomes totally entwined in the child’s psyche. I once heard of a violinist who every time she picked up her instrument heard her father’s voice over the sound of the strings. 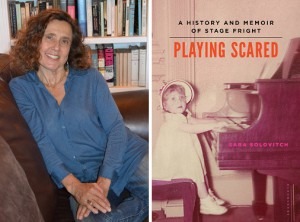 What can we do as a society to prevent young people from debilitating pressure? Of course teachers will make a great difference, but in the book you also describe drawing a lot of benefit from your yoga study – what about that sort of work?

I believe that a lot of conservatories and music programs now offer and even require their students to take wellness classes. But there remains a very competitive edge to music study that the Alexander technique and yoga can never alone address. My middle son graduated from an elite conservatory a few years ago. It makes me sad to say that he looks back on his time there with loathing, and I don’t think he’s unusual. For him, it was all about nonstop hyper-analysis. He compared it to bringing a bunch of models together and asking them to analyze each others’ bodies – big surprise when everyone of them develops anorexia.

In your book, you asked whether it was ‘worth all this effort just to play for myself’. Do you have any further thoughts on that issue? After the event, do you now gain any satisfaction from playing for yourself?

I most enjoy playing for myself and given my druthers, will probably always look for an excuse not to play before others! In my heart of hearts, I still subscribe to Glenn Gould’s dictum – that the best ratio between pianist and audience is one to zero. As a writer, however, it’s very important for me to have my words read, to reach an audience that will take them in, and respond to what I have to say. It’s not any different with music.

Sara Solovitch’s Playing Scared is published by Bloomsbury, and available in all good bookshops. For more information visit Sara’s website