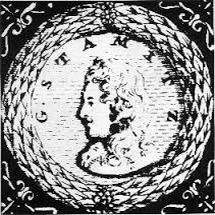 In June 1717, the Bohemian settlement of Německý Brod recorded the birth of Johann Wenzel Anton Stamitz (1717-57). Son of the town organist, Johann received his early education at a Jesuit grammar school—known for its excellence in music education—and subsequently enrolled in the Faculty of Philosophy at the University of Prague. However, he left the academic environment after a single year to concentrate on a career as a violin virtuoso. For six years he stubbornly pursued his dreams by performing in various European centers before he was engaged as a violinist by the Mannheim Court in 1741.

Under the Elector Carl Theodor, an enlightened ruler with strong interests in philosophy, science and the arts, the court at Mannheim became a dazzling hub for art and literature. Carl Theodor’s central interest was music, and he spared neither effort nor expense in building his court into one of the leading musical centers in Europe. In this fertile intellectual and musical environment, Johann Stamitz became a pioneer in the development of the symphony and the formation and conventions of the Classic Style.

Johann Stamitz enjoyed considerable fame as a composer during his lifetime, and a number of his symphonies were published and republished in London, Amsterdam, Nuremberg and Paris. The foundation of his modern reputation rests on 72 symphonies, of which roughly 55 have survived. The principal innovation of his symphonic works is the adoption of the cycle of four movements, with a minuet and trio in third place followed by a Presto or Prestissimo. In addition, Stamitz shaped the opening movements into what would become the typical sonata form of first subject, second subject, development and reprise. An extension of phrase-lengths, heightened interest in thematic development and the expansion of finales led contemporary critics to suggest, “Like another Shakespeare, Stamitz broke through all difficulties and discouragements. Without quitting nature, he pushed art further than anyone had done before him; his genius was truly original.”

Johann Stamitz: Symphony in E-flat Major, Op. 4, No. 6
Composition aside, Johann Stamitz was instrumental in developing the Mannheim Court ensemble into one of the finest orchestras in Europe. He gradually worked his way up the ranks to concertmaster, and by 1743 was appointed conductor of the ensemble. Known as a perfectionist, he demanded performances of the highest standards and prepared the foundations for an essentially modern orchestral technique. The music critique Charles Burney compared the Mannheim Orchestra to an army of generals, “equally fit to plan a battle as to fight it. Indeed there are more solo players, and good composers in this, than perhaps any other orchestra in Europe.” Famous throughout Europe for its precision, the orchestra under Stamitz also developed the ability to render novel dynamic effects. The aesthetician C.F.D. Schubart recalled that listening to the orchestra “one believed to be transported to a magic island of sound. Its forte is like thunder; its crescendo like a mighty waterfall; its diminuendo a gentle river disappearing into the distance; its piano a breath of spring.” Contemporary eyewitness report that “these electrifying effects caused audiences to spontaneously rise from their seats.”

With his career in full bloom, Stamitz married Maria Antonia Lüneborn in 1744. The couple had five children, including the eventual composers Carl and Anton. A daughter Maria Francisca was born in 1946, and two further children died in infancy. By 1745, Johann Stamitz was the highest-paid member of the orchestra, and Carl Theodor appointed him director of instrumental music in 1750. Forging links between Manheim and Paris, one of his symphonies with horns, trumpets and timpani was performed at the Concert Spirituel on 12 April 1751. In the late summer of 1754, Stamitz departed for Paris where he was already a celebrity, and stayed for the better part of a year. Performances of his compositions were frequent, and Stamitz appeared with great success in a number of public concerts, including the Concert Italien. Various Parisian publishing houses issued his works, and Stamitz returned to Mannheim in the autumn of 1755. Stamitz was still a young man, however, his health begun to decline rapidly and he passed away at the age of 39. The official record of his death reports, “March 30, 1757. Buried Jo’es Stainmiz, director of court music, so expert in his art that his equal will hardly be found.”