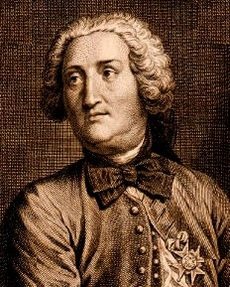 We would be entirely wrong to assume that musical duels were in the exclusive domain of the 19th Century. Far from it, throughout the 17th and 18th Centuries, musicians busily battled in musical contests that measured technical facility and improvisational skills. Unlike musical competitions today, where a more or less objective panel of renowned expert performers judges the musical opponents, the duels of the past were predominantly adjudicated by a group of aristocratic connoisseurs. These musical contests clearly attest to an innate human appetite for competition, even in domains where the results are difficult to quantify. Of course, in many cases the actual musical duel never happened, with an opponent loosing his courage. It might be argued that the most famous musical duel that never happened was scheduled between Johann Sebastian Bach and Louis Marchand. The build up, however, has become legendary!

Louis Marchand: Grand Dialogue
In his time, J.S. Bach was primarily known as a keyboard virtuoso. At the age of 23 he was appointed court musician in the chapel of Duke Johann Ernst in Weimar. He would only stay for seven months, but his reputation as a keyboard genius had already reached the town of Arnstadt, and he was quickly invited to inspect the new organ, and gave the inaugural recital at Saint Boniface. His appointment as organist soon followed, but he was dissatisfied with the standards of the singers in the choir. So, when he was offered the position as organist at Saint Blasius in Mühlhausen, he quickly took up the invitation. His reputation as a performer continued to grow, and in 1708 he returned to Weimar as organist and concertmaster at the ducal court. Surrounded by professional musicians, Bach began to compose keyboard and orchestral works, including the preludes and fugues that would eventually make up his “Well-Tempered Clavier”. In addition, the majority of his organ works were composed during his tenure in Weimar, and Bach performed them regularly in concerts at the court.

Louis Marchand, on the other hand, was considered to be one of the best-known French virtuosi of his time. A child prodigy, Marchand secured his first organist job at Nevers Cathedral at the age of 14. His keyboard skills quickly became legendary, and it was reported that he did not even have to compete for the position of organist at Auxerre Cathedral; the selection committee simply handed him the job. In addition, when he first arrived in Paris, every vacant job was immediately offered to him. His undisputed mastery of the keyboard was apparently augmented by a volatile and flamboyant personality. He got Pierre Dandrieu fired for implying that he had gotten a prostitute pregnant, contested with François Couperin the authorship of “Les bergeries”, and beat his wife in his spare time. Yet he was greatly admired by Jean-Philippe Rameau — for his performing skills and compositions — and he left for German in 1713. Once arrived, he performed for the Emperor and several Electors, who were mightily impressed by his keyboard virtuosity and masterful improvisations.

In 1717, J.S. Bach was on a concert tour to Dresden, as was Louis Marchand. J.B. Volumier, concertmaster at the court, called upon Bach to engage in a musical contest. Apparently, Volumier arranged for Bach to hear, “from a place of concealment” a performance by the Frenchman. Having thus gauged his opponent, Bach issued a respectful challenge, which was quickly and contemptuously accepted by Marchand. At the appointed time in the palace “persons of high ranks and of both sexes,” assembled. Bach, always known for his punctuality, appeared, however Marchand was not to be found. A message was sent to remind him of his dueling engagement. To the astonishment of the assembled nobility, it was revealed that Marchand had left Dresden by special coach that very morning. A very popular theory stipulates, that Volumier had given Marchand the same opportunity of secretly hearing Bach perform, and having heard Bach at his best, the Frenchman lost all courage and fled town at the earliest convenience. A contemporary report concludes: “Bach, who thus remained sole master of the scene of the contest, accordingly had plentiful opportunity to exhibit the talents with which he was armed against his opponent…” However, the music critic and theorist Friedrich Wilhelm Marpurg observed, “”It would be wrong to conclude from this defeat of Marchand in Dresden that he must have been a poor musician. Did not as great a one as Handel avoid every opportunity of confronting the late Bach?” We will never know how well Marchand’s “Musettes for Christmas Eve” might have fared against Bach’s Toccatas and Fugues; for obvious reasons this non-event was never mentioned nor documented in France.