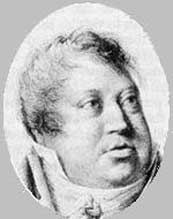 The tradition of the touring piano virtuoso did not start with Sigismond Thalberg or even Franz Liszt. This distinct honour should rightfully be bestowed upon the Czech pianist and composer Jan Ladislav Dussek, who was born 12 February 1760 in Čáslav. His father, the local organist, quickly discovered the musical aptitude of his son and began to teach him to play the piano at the age of 5, and the organ at age 9. Young Ladislav quickly took on assorted organist duties, and dazzled audiences with his virtuoso piano playing. One such admirer, a certain Captain Männer of the Austrian army took Dussek into his services, and both men traveled to Belgium in 1779. Once arrived, Dussek quickly accepted a position as organist in Mechelen, and played a well-received public recital. A further concert in Amsterdam brought him to the attention of royalty, and he even gave a performance before Emperor Joseph II of Austria. Dussek soon moved on to Hamburg, where he gave public performances and actually might have studied with C.P.E. Bach. At any rate, once there, he did publish his first works, three piano concertos and three violin Sonatas under the combined Opus 1.

Hamburg could not hold Dussek for very long, and soon he was on his way to St. Petersburg. His playing enchanted Catherine the Great, yet he was forced to leave in a hurry as the secret police supposedly uncovered a clandestine plot that alleged that he was trying to assassinate the Tsarina. On his way towards the West, he stopped in Lithuania and was appointed music director to Prince Antoni Radziwill. Barely a year later, Dussek was on the move again because of an alleged affair with the Princes’ wife, the Princess of Thurn and Thaxis. For the next couple of years, he extensively toured throughout Germany, firmly establishing his reputation as a keyboard virtuoso. After a brief, but highly successful tour of Italy, Dussek moved to Paris. He quickly became a favorite of Marie Antoinette, and played with a violinist by the name of Napoleon Bonaparte. In June 1789 Dussek left for London in order to avoid the looming political crisis in France.

Piano Concerto in B flat major Op. 22
He quickly established himself as a sought after teacher and virtuoso performer. In 1791 and 1792, Dussek featured together with Joseph Haydn in a series of concerts. But he also established a working relationship with the piano maker John Broadwood, a collaborative effort that greatly improved and refined the fortepiano instrument. Dussek also entered into a troubled marriage, and engaged in a music-publishing venture with his father in law. His business and personal expeditions none withstanding, Dussik continued to perform and compose music at a feverish pace. He even tried his hands at opera and “The Captive of Spilberg” was given at Drury Lane on 14 November 1798. Together with Muzio Clementi and John Field, Dussek contributed significantly to the development of a distinct “London” School of pianoforte compositions that took advantage of the superior possibilities of the Broadwood piano.

Violin Sonata in G major, Op. 69, No. 2
Following the failure of his marriage and his publishing business, Dussek fled to Hamburg, and in October 1804, Prince Louis Ferdinand of Prussia appointed him Kapellmeister. When the Prince was killed in battle, Dussek wrote his popular piano sonata, “Elégie harmonique,” Op. 61. By 1807, Dussek returned to Paris and entered employment with the powerful French minister Talleyrand, an occasion he celebrated with one of his most popular Sonatas, “Le Retour à Paris.” Dussek remained in Paris for the rest of his life — he passed away on 20 March 1812 — and during his final years of an exceptional artistic journey he became grossly obese and was unable to reach the keyboard. As a composer, Dussek wrote a number of piano concertos — 18 have survived — a multitude of piano pieces and piano sonatas, and various chamber works, yet he is largely forgotten. As a performer, he helped to spawn some of the technical and stylistic innovations — he was the first to write specific pedaling instructions into his scores — that would be taken over by the next generation of piano virtuosi. His greatest influence, however, might have occurred inadvertently, as John Broadwood sent his instrument, with all of Dussek’s improvements, to a young Beethoven in Vienna.