Composers Love
The Case of the Missing Harp
by Georg Predota March 30th, 2015 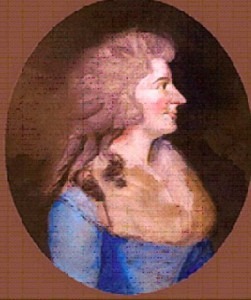 As soon as the pianist and composer Jan Ladislav Dussek (1760-1812) left his native Bohemia for Paris, his fortunes increased manifold. He performed for Marie Antoinette and was a regular guest at the home of the poet Beaumarchais. He dedicated his first opus, a collection of sonatas for piano and violin to the poet’s daughter, and he made the acquaintance of a young but poor artillery cadet by the name of Napoleon Bonaparte. Just when his career was ready to explode, the French Revolution gently nudged him to set sails for England in May or June 1789. But Dussek did not go alone, and his hasty departure caused a veritable scandal in the French Capital. Allegedly, he seduced the harpist Anne-Marie Krumpholtz to run away with him to London. However, Anne-Marie was married to the composer Jean-Baptiste Krumpholtz, who is said to have drowned himself in the Seine as a consequence of his wife’s indiscretion.

Once in London, Anne-Marie was quickly forgotten as Dussek focused on establishing a career on the British Isles. He performed in Salomon’s subscription concerts together with Haydn, who excitedly wrote to Dussek’s father, “I am happy to inform you that you have an upstanding, polite, and musically gifted son. I love him as you do, as he has earned it. Give him your blessing, so that he will be always happy, something that I wish for him, given his great talents”. Dussek enjoyed great popularity and a fine reputation in London, and the boulevard press went to great lengths to report on his culinary expeditions. A reporter wrote, “I dined with three friends at the Ship Tavern in Greenwich…During the meal the waiter set aside a table near the window for one person. The food was brought in and consisted of a bowl of cooked eel, broiled flounder, a cooked chicken, a plate of veal cutlets, and a fruit torte. I had scarcely remarked that this was quite a lot for one person when Dussek came in and sat down to eat. He did in fact sit eating for some time, but after a half hour he had cleaned the plates, and nothing but the bones was left.”

During the spring of 1791, the soprano Sophia Giustina Corri, the daughter of an Italian voice teacher who had lived in London for twenty years gave her London debut at the age of sixteen. Originally, the family of Italian musicians had settled in Edinburgh but when her father established a music publishing business in Soho the family moved south. Sophia first performed in public at age four and by her teenage years was an accomplished singer, pianist and harpist. We are not entirely sure if Dussek was attracted to Sophia because of her musical talents, radiant youth or the fact that her father owned a publishing business. Whatever the case may be, in the summer of 1791 Dussek undertook a concert tour through Scotland with her father, and by August 1792 Dussek and Sophia were married. Their daughter Olivia was born soon thereafter, and together with his young wife, Dussek took part in the first performance of Haydn’s Seasons.

By 1794, Dussek had joined his father-in-law in establishing the publishing firm “Corri, Dussek & Co., but the marriage was not a happy one. Dussek had been playing the field, and Sophia had fallen in love with a man by the name of Gentil. Wanting to leave her husband, she devised a cunning plan. When Dussek was invited to dinner with the piano builder Broadwood, Sophia went to Gentil in order to leave the country with him. On the pretense that her harp needed repair, she has stuffed all her belonging into her empty harp case. However, a servant alerted Dussek and his father-in-law and they quickly knew where to find Sophia. A predictably noisy argument ensued. Sophia demanded a divorce claiming to be pregnant by Gentil. Yet Gentil revealed that Sophia had practically thrown herself at him and that he loved another woman more than her. This highly embarrassing situation—particularly for Sophia—eventually led to an uneasy reconciliation between Dussek and Sophia. By 1799, the publishing business was in trouble and Dussek hastily fled to Hamburg. His father-in-law had to serve a prison sentence, and Dussek certainly never saw his wife and daughter again. Sophia had to wait until Dussek’s death in 1812 before she was able to marry the viola player John Alois Moralt. The couple happily lived in Paddington, and Sophia established a highly respected piano school.