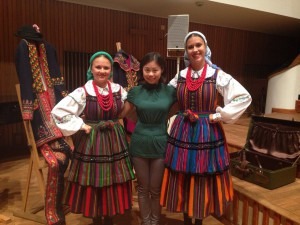 At the Polish Dance Workshop

What are my impressions of Poland? The deadly WWII, Holocaust and Threnody to the Victims of Hiroshima… Throughout my college years, this country always appeared to me as miserable. This year in March, after a month long struggle, I finally filled in my application to join the 15th Chopin-Górecki Music Festival in Warsaw, hoping to discover the root for all those captivating melodies composed by the Poet of the Piano.

Finally in mid-July, I set off with my friends in search of our musical summer. More than eighty pianists, string players and vocalists gathered at the Fryderyk Chopin University of Music, getting ready to immerse into this seemingly quiet historical city. To my surprise, this short stay offers much more than what I had expected. In addition to individual classes with professor Jerzy Sterczyński, the head of the Piano Department at the university, I was also welcomed to sit in all other classes. “Give your shoulders some rests. You’re not a penguin!” “Don’t simply let the sounds drop, keep them 5cm above the ground.” “Remember, tension And relaxation…” Together with his dramatic facial expressions, professor Jerzy never fails to inspire new ideas and practice methods in each class. 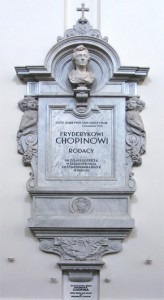 Inside the Holy Cross Church where Chopin’s heart resides
© http://www.newyorker.com/

How about a taste of some Polish folk traditions? On a Friday evening, traditional folk dance costumes were hung around the university concert hall. After an uplifting dance performance, we were invited to go on stage and have a quick tutorial for some basic steps of Kujawiak. It was said that a number of Chopin’s Mazurkas were indeed Kujawiaks, most notable with the minor thirds which create a melancholy, sorrowful quality in the music (such as op.6 no.4, op.30 no.4, and op.41 no.1).

Yes, it’s for sure that traces of Chopin could be found literally everywhere around his motherland. In The Chopin Museum, his last piano, original letters, manuscripts, his portraits by George Sand, and even his hair collected after death were well-preserved. Musical benches appear in the public sites around Warsaw, playing various compositions by the master. During one of the school excursions, we visited Żelazowa Wola, his birthplace. Not only did I feel closer towards Chopin after listening to an all-Chopin concert at the “Etiuda” and walked through the “Mazurek” Bridge inside the park, our tour guide furnished us with stories of almost every member in his family during the one-hour drive! 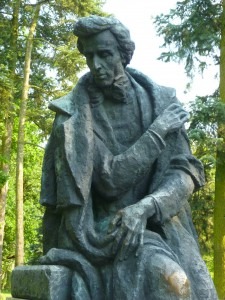 Chopin’s statue inside the park of Żelazowa Wola,
his birthplace

Yet, Chopin is not the only one. And many more indeed! Being a big fan of French music since youth, I’m almost ignorant to the music scene in other parts of Europe. My most vivid memory of Polish composition was Penderecki’s Threnody to the Victims of Hiroshima. It was powerful, yet too heavy to appreciate. During a short day trip to Kraków, our young tour guide became enthusiastic when he discovered our main purpose for the visit. “I play cello! And I love the music from the 1960s. Yes, and Penderecki as well. His Cello Concertos!”

After two weeks of explorations around historical sites in the country, I listened to the Cello Concerto No. 1 by Penderecki, as recommended by my new friend. Surprisingly, stories and images of various monuments appeared in front of my eyes when the long vibratos and ferocious cadenza came rushing into ears. Perhaps, every note marked on the score speaks a story – the restless past of the nation, which is hardly possible to comprehend without firsthand experience.

On my last day in Warsaw, I revisited the Holy Cross Church, where Chopin’s heart lies under one of the pillars. On top of it was a biblical inscription – “For where your treasure is, there your heart will be also”. Finally, I understood why the composer wished to have his heart return to his homeland, given he had never returned there in his last years. Poland is surely a land with numerous treasures, so much to be discovered not only with your eyes, but with your open heart.

After graduating with a degree in English Literature, Eliza continued her journey of discovery in the field of classical music. A beautiful read, an enchanting melody, and a peaceful time with her harp are some of her most beloved moments. Currently, she’s working as an early childhood music educator, translator and editor for Interlude. She is currently undergoing her training as a harp therapist.