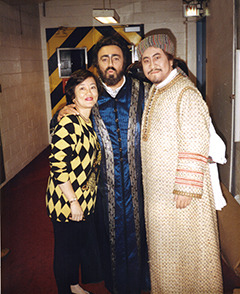 Nessun Dorma was the caption on a colourful poster for the 13th annual CCSA ( Chinese Community Service Association ) Chinese New Year Gala held in Vancouver on 10th February, 2015, to celebrate the Year of the Goat, Sheep or Ram. The chosen venue was a tastefully designed concert hall with exquisite acoustics – the Chan Centre for Performing Arts on the University of British Columbia campus. Glancing at the program, one could predict that it was going to be an evening of joyful song and dance catered to the demographic that is usually absent in classical concerts.

The Feature Artist in the poster caught my eye – a distinguished-looking gentleman with an enigmatic facial expression. His name is Tian Hao Jiang, a Beijing-born world-renowned basso cantante who moved to New York in 1983. His impressive career spans over 19 years at the New York Metropolitan Opera, appearing in 26 operas. He has sung over 1,400 performances in 50 operatic roles worldwide, and has performed on some of the world’s most prestigious international stages, including: the Berlin State Opera, Teatro Comunale in Florence, Teatro Carlo Felice in Genoa, Arena di Verona, Teatro Colon in Buenos Aires, and Chicago Lyric opera. He has also collaborated with operatic giants like Luciano Pavarotti and Placido Domingo. As I seated myself among the audience, who obviously came expecting rowdy entertainment and fanfare, I was getting increasingly jittery about their visible restlessness, and wondered about their capacity to appreciate an artist of Tian’s stature. 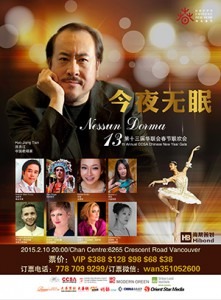 A Tale of Two Acts : The first Act was presented by CCSA as a mishmash variety show that comprised of a ribbon dance, folk song, tongue twister act, Peking opera excerpt, “Phantom of the Opera” number, string quartet rendition of Chinese compositions and ended with a contemporary dance. All narration was exclusively conducted in Chinese – Putonghua – and, by non-Chinese Masters of Ceremony! Their command of the language was superb, as if Chinese was their mother tongue. However, eloquent speeches, popular content, glitzy costumes and glamourous staging were not sufficient to compensate for artistic mediocrity. The audience was distracted – talking randomly, fidgeting in their seats, with rambunctious children giggling and jiggling, cell phones ringing etc.. This crowd barely fell short of peeling tangerines or cracking water melon seeds! Among the predominantly Chinese audience were some local Canadians who, unfamiliar with the Chinese langauge, had no idea what was going on, so joined in the restlessness, albeit in a more polite form. My blood was boiling, and I could not help but stare disdainfully at the “culprits”, who must have assumed I was just naturally rude. 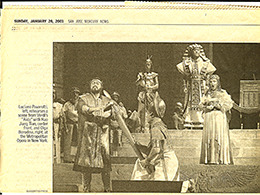 The second Act belonged to Tian Hao Jiang and company. He made a dynamic entrance, promptly sat at the piano, telling stories with ease, singing favourite repertoire, accompanying himself on the piano, thus captivated the audience. They smiled, clapped, and sang along enthusiastically! Then he introduced his entourage one by one onto the stage – three from a group of twenty talented opera singers whom he and his team selected for the iSING! FESTIVAL in China ( formerly known as iSING! BEIJING ) after extensive travels around the world to conduct auditions. This is a unique initiative that Tian and his wife Martha Liao founded and launched in 2011, introducing Putonghua ( Mandarin ) as a lyric language to Western opera singers with amazing results. The program iSING! has attracted international attention and made its American debut concert at Lincoln Centre in 2013. These marvellous young singers ( Jonathan MacArthur, Juliet Petrus, Rachel Suarez Groen ) shared the stage with Tian, and performed “O Mio Babbino Caro” from Gianna Schicchi by Puccini, excerpts from Bernstein’s Candide, “Non Piu Andrai” from Le Nozze di Figaro by Mozart, duet “Brindisi” from La Traviata by Verdi, interspersed with popular folk songs and a selection from the Peking Opera Shajiabang, all sung in Chinese, accompanied on the piano by Katherine Chu, a critically acclaimed accompanist, coach and conductor. Miraculously the audience listened! Partially it was due to these performers’ high professional standards – outstanding voices, musicality and choreography, but partially because they were fascinated by the iSING! concept. The fact that Tian and his iSING! singers cared to make such an extraordinary effort to engage the audience in their own genre of music ( interpreted beautifully ) moved them to reciprocate with undivided attention. As inexperienced as they were in classical music, they could instinctively recognize superlative quality. A crowd pleasing extravaganza – medley “From Jasmin Flower to Turandot”- concluded the concert, leaving us all in festive spirits. 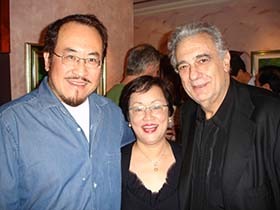 Inspiration : To integrate different cultures and foster mutual understanding has always been an immense challenge not exclusive to performers. There is nothing more demoralizing than to sing your heart out ( or deliver a passionate speech ) to a disinterested and distant public. However, Tian Hao Jiang definitely has the magic potion. Somehow he was able to enrapture his audience ( originating from various levels of sophistication and social backgrounds ) not just with world-class skills and a strong presence, but genuine warmth and generosity. Watching him that evening, I was reminded of a poem by Rudyard Kipling -“If”. Here is an excerpt :

If you can talk with crowds and keep your virtue,
Or walk with Kings—nor lose the common touch,
If neither foes nor loving friends can hurt you,
If all men count with you, but none too much;
If you can fill the unforgiving minute
With sixty seconds’ worth of distance run,
Yours is the Earth and everything that’s in it,
And—which is more—you’ll be a Man, my son!