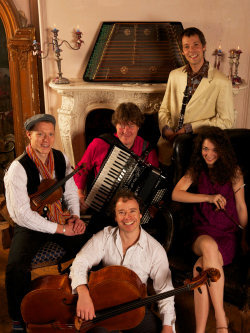 Playing the Brahms Clarinet Quintet interspersed with gypsy folk may seem odd – but this is what the band ZRI lives for. There is a method in their madness, and speaking to accordion player Jon Banks gave me an insight into how this at-first eccentric idea actually makes a lot of sense.

OP: Tell us a bit about how your band came together.

JB: It was largely the Ben Harlan (the clarinettist)’s idea. I played with Ben in a group called The Burning Bush, where we played a lot of traditional Jewish music. Nearer the end of our time at The Burning Bush, we decided that we wanted to try out the Brahms Clarinet Quintet with a klezmer band. His view, after having played it with a string quartet, was that he was constantly pitted against the quartet – it was him versus them, in a way. Our aim was to integrate the whole thing a bit more.

OP: What was the inspiration for the group?

JB: Brahms himself was very into gypsy music. There are gypsy bits in the Quintet, and he was fairly left-wing, anti-Wagnerian and all that. The café he went to, the Red Hedgehog, was where he heard a lot of café bands, so our idea is to take Brahms’s music and intersperse it with some of the music he would have heard.

We’d played a lot of klezmer music before, so we knew the sound world well. I remember the first few rehearsals, where I disagreed with every decision that was made! I thought to just go along with it, since it was quite a creative process, and everything ended up working really well.

People think this kind of music and Brahms are polar opposites, but they’re not. Brahms listened to this music. People put Brahms on a pedestal, with his big bushy beard, but he was very in touch with this music, especially in his youth – it was important part of his world.

OP: How does the Brahms programme work?

JB: We play the Clarinet Quintet in its entirety, but we insert these gypsy tunes into it, sometimes in the middle of the movements themselves. My musicological side screams ‘You can’t destroy the architecture of the piece like this!’ but it works. 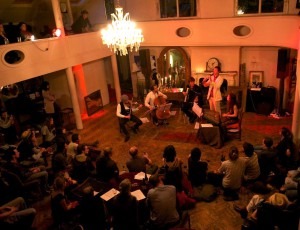 OP: Have you ever had any listeners opposed to the project?

JB: Not after they’ve heard it! My older brother, for example, who was a music teacher, was utterly appalled with the whole idea! But after concerts we’ve always had incredibly positive feedback. This could be something that ends up being quite experimental and inaccessible, but it’s really not – and that’s largely thanks to how brilliant all the musicians I work with are.

OP: When arranging the Brahms, are the instruments split up in exactly the way they are in the actual quintet? (ie do you share notes between instruments or play the parts as writ?)

JB: The violin and cello parts are played pretty much note-for-note. The second fiddle and viola parts are shared between the accordion and the santouri, depending on how they lie on the instruments. The challenge was with the quintet was to write parts that worked well on the instruments, but also sounded good!

OP: Are you planning to expand your ideas to other composers?

JB: We’re toying with this idea at the moment. I’d really love to do some Second Viennese School stuff – Webern, Berg and the like – and some Stravinsky, that would be really great. However, there are some copyright issues that mean we can’t really do much ‘modern’ stuff; it’s not as easy as it was with the Brahms.

OP: Where are your next concerts?

JB: We’re doing a concert in Kings Place in London next May, and some more in Kent. It’s harder to arrange things further afield at the moment, as everyone’s scattered around the country and it’s hard to pin everyone down. There’s a great chemistry in the band, and it’s so important to have this, especially when improvising. When the band gets on, it really works.