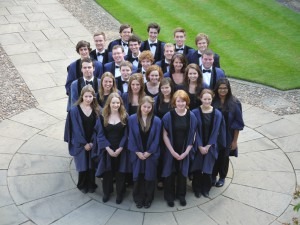 Caius College Choir is one of Britain’s leading collegiate choirs. The College was founded in 1348 but the musical tradition stems from the late nineteenth century when the well-known composer of church music Charles Wood became Organist. The choir in Wood’s day contained boy trebles; it is now a mixed undergraduate ensemble and is directed by Geoffrey Webber.

The Choir sings Chapel services during the University term and has a busy schedule of additional activities including concerts, recordings and broadcasts. The Choir travels extensively abroad, performing at a variety of venues ranging from major concert halls to universities, cathedrals and churches in Europe, America and Asia, often in connection with other professional ensembles such as Opera Northern Ireland, the Philharmonia Baroque Orchestra of San Francisco, and the Orchestre National Bordeaux Aquitaine. The Choir also gives a number of concerts in the UK each year, and has made appearances at St John’s, Smith Square, The Cadogan Hall, the Spitalfields Festival and the Aldeburgh Festival, and at many other concert halls and festivals around the country. Live radio broadcasts on BBC Radio 3 and 4 form a regular feature of the Choir’s schedule. The Choir has also appeared on television programmes on BBC 1, BBC 2, Channel 4 and on several foreign networks.

The Choir’s recordings have often specialised in the re-discovery of forgotten choral repertories, including previously unpublished music from within the English choral tradition and beyond. A series of highly acclaimed CDs has included music by British composers Samuel Wesley, William Child, Michael Wise, William Turner, Edmund Rubbra, Patrick Hadley, John Sanders, Mansel Thomas and Rebecca Clarke, and by continental composers Joseph Rheinberger, Giacomo Puccini, Leonardo Leo and Charles Gounod. The Choir has also recorded two reconstructions – the Latin Mass in E Flat by Janáček and the St. Mark Passion by J. S. Bach – three programmes of Swiss choral music (in conjunction with the National Library of Zürich), and the complete anthems of Charles Wood. Other recent CD releases include a recording of modern and medieval vocal music entitled All the ends of the earth, and a recording of modern and medieval Christmas music entitled Into this world this day did come. The choir’s 2011 recording of music by the leading British composer Judith Weir has achieved high acclaim and was the BBC Music Magazine’s Choral and Song Choice in December 2011. The choir’s latest release is Haec Dies – Byrd & the Tudor Revival on which Byrd’s Mass for Five Voices is surrounded by music belonging to the Tudor Music revival of the early twentieth century. 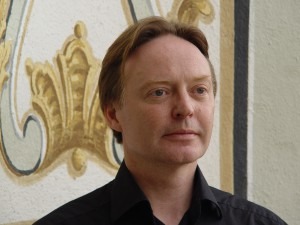 Geoffrey Webber began his musical education as a chorister at Salisbury Cathedral, and after being Music Scholar at King’s Worcester, he won an Organ Scholarship to New College, Oxford. After graduating with a First, he became Acting Organist at New College and Magdalen College, and later University Organist and Director of Music at the University Church. During this time he also directed the Edington Festival. After completing his doctorate he became Precentor and Director of Music at Gonville & Caius College, Cambridge and now divides his time between conducting, playing, lecturing, teaching and research. Publications include North German Church Music in the Age of Buxtehude, The Cambridge Companion to the Organ, and The Restoration Anthem.