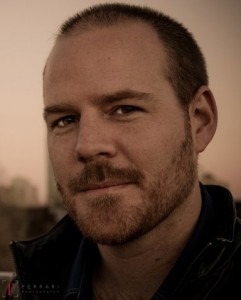 Steven Snowden has done some pretty interesting things in the name of music composition, from creating music installations with Nintendo Wii-motes, to collaborating with performers through blogging. Not one to shy away from musical collaborations, this month, the 32-year old composer has found himself in the heart of Asia with one of his most personal compositions in hand, ready to take on the third season of Intimacy of Creativity.

What inspired you to pursue a career in music?

I started composing actually very late. I didn’t learn how to read music until I was 16. Before that I played in a rock band. That’s how I got started in music initially. I kind of fell in love with it and wanted to learn more. When I was a freshman in high school, I quit the football team to join the band, not a very big popularity move but it turned out to be a good thing for me. I kept pursuing music from there and started composing. I started composing because there were all these things I liked to play on my horn, extended techniques and other things that I’ve never seen written before. So in order to do a presentation for my studio class, I decided to write a piece. It was a terrible piece but I had a lot of fun doing it. And then I just kept going from there. I kept composing from that point on.

Right now you’re based in Portugal on a Fulbright Grant. What are you working on?

It’s a motion tracking technology for collaboration between music and dance. I’ve written a lot of music for dance… and I’ve always found there’s a bit of a hurdle to get over in terms of collaboration because once you get to the performance, it’s more of a simultaneous kind of happening of the dance and the music at the same time. I’m interested in researching ways that we can use technology to have collaboration actually happen in performance. So if one of the dancers raised his or her left hand, which could change the pitch, that kind of thing.

What’s the appeal behind interdisciplinary collaborations?

I find it very inspiring because I feel like I can always learn a lot as a musician from other artists. In particular with dancers and choreographers, even though the means by which we express ourselves are different, the language is actually very similar. It’s an expressive art form over time. We’ll take a similar idea… and approach it from very different ways. [The choreographers] would approach it in ways that I would never have considered because I’m so focused on music all the time. I feel like it’s something that has opened up my mind to a whole lot of possibilities.

I usually spend a fair amount of time just drawing. I like graphic things to first get the big picture so I’ll get a big piece of paper, some colored pencils, and use one color to represent the dynamic changes over time, and another color to represent textural things. It’s my way of getting my ideas right out on the page without having to wait for notation because I find it at first to be kind of limiting. My first ideas are often forms and textures. Harmony, melody, those things usually come later.

Is music set in stone?

Part of it is, but my philosophy of working with performers is that every piece is collaboration. There’s only so much information you could put on the page when you’re writing music. It’s the bare bones of information – how loud are you going to play it? What’s the articulation? Those are all the essential elements of music, but at the same time there’s so many intangible things that the performer has to put into it, so every time a person picks up a piece of music to play, they’re just translating the information on the page, they’re giving it life. Not to make light of score study, but really, a score is just a stack of paper. It doesn’t do anything on its own. It doesn’t have a life or anything unless a person picks it up and plays it.

How do you feel about having other performers critique and change your work?

I’ve never really considered it real critique. I’ve always just considered it collaboration, or suggestions. I love getting advice. I like to, whenever I can, to have this atmosphere for performers where they can feel like they can make those suggestions. Often times, just because I don’t play the instrument, I might not be aware… of easier routes, better ways, just because I’m not one of those performers. You just have to have a little faith in them, that they know a little bit better about certain things because that’s the area of their expertise.

Could you describe your own music style?

I would say that it’s about re-contextualization. It’s about taking the familiar and shedding new light on it. 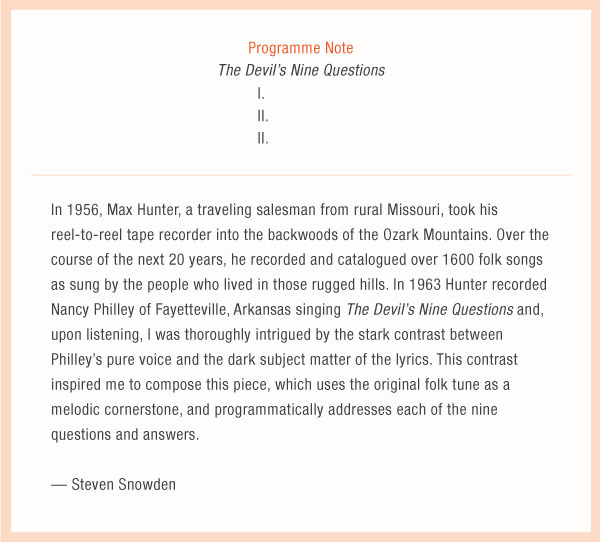 Tell us more about The Devil’s Nine Questions.

I found the [material] in a digital archive in the library in Greene County, Missouri near where I grew up. There was a traveling salesman in the early 20th century who had a reel tape recorder. He was very fascinated with folk songs, and wanted to go and record all these different people singing folk songs so that they could be preserved because they weren’t written down or anything like that. I spent a lot of time listening to these recordings and found this one in particular that was musically very inspiring. In particular the way it was sung. There was something about the innocence in her voice that I found very intriguing, sweet and innocent even though the subject matter of the song was very dark. It’s about this girl who’s about to be dragged off by the Devil.

Can you tell us more about what to expect from the piece?

There are three movements. You could expect a journey; it’s a transformation in a way. It starts off as a very clear representation of the folk song itself. Typically in performances in the past I’ve played the recording, 20-30 seconds of it. The first movement is a very clear statement of this folk song. Over time it sort of evolves, and there are other material that’s sort of antagonist, sort of attacking the folk song in a way. It transforms and by the end of the piece, it’s sort of gone through, suffered these trials and tribulations, but at the end of the piece the folk song is still there but it’s been changed a little bit.

You’ve said the piece was very special to you.

It’s a piece that is unabashedly nostalgic. Working with this folk song material reminded me of home. It’s the kind of music that I grew up with. It wasn’t an intellectual exercise at all I basically just did what felt right, what I felt like it should be. So in that way, it seemed like a very personal thing. It was a real statement of who I was musically rather than me trying to be someone else, or trying to write music that my professor would like to hear. I was just writing music that I wanted to hear and wanted it to do. It was a turning point for me as a composer.

What goals do you have for the future?