Guest Posts
In Touch with Narong Prangcharoen at The Intimacy of Creativity
by Cathy Hung May 25th, 2011 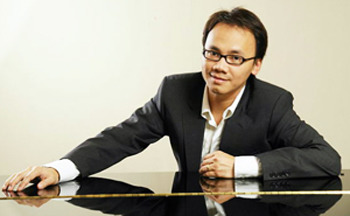 It is as if one is breathing in a gulp of cool air atop the deep mountains listening to Thai composer Narong’s Bencharong. Sometimes energetic and flashing whilst other times calm and delicate, there is a great depth of emotion embedded within the clear layers of colourful melodies- perhaps more colourful than a ‘five-coloured porcelain’ Bencharong. With the exception of employing traditional Thai folklores, Narong admits being influenced by music of his homeland, “I try to make my music sounds like Thai music, only without folklores… the reason why I avoided that is because I do not want to end up writing more Thai folk songs. Instead I’d rather write my own folklores.”


On commenting his own music, Narong explains rather certainly, “I’d say my music is very spicy, just like Thai food. If you like spicy food you’ll enjoy it; if you don’t, you just don’t.” Indeed it is quite an obvious cue on the composer’s love of cooking- in fact his passion drives him awake to create delicacies at 3 a.m. when he tries to take a break from composing. Instead of carefully formulating ingredients in precise quantity, Narong prefers improvisation, “I never measure everything precisely. Instead, I put things randomly in various combinations.” An example of Narong’s ways of combination includes the following: substituting table salt with fish sauce for the taste of saltiness. In music, you can almost see the same thing hearing the composer’s juxtaposition of musical layers and instrumentations. Don’t get too carried away by the improvisatory bits though, because next Narong is going to list ‘discipline’ as the second realistic principle of a composer. “I can write anywhere at any time. I’m trained to resist disturbance because I guess you have to be very disciplined especially when you have commissions and deadlines.” Then what if you suddenly run out of inspiration? If you were Narong’s students, you would’ve been asked to keep writing even though you know it’s bad. “We’ll analyse and discuss why it’s bad before discarding the idea. It’s about getting something out of the bad.”

Being the only musician in his family, Narong feels thankful for all the faith his family provides. It is somewhat realistic to hear the composer reveal his frustration at the beginning of his composing career as his future could hardly be foreseen. “They love me so much that they believe in whatever I choose… Five years ago there was really no way they could foresee my achievements, but they trusted me and now it’s all started to pay back.” Listing John Corigliano, Magnus Lindberg and his teacher Chen Yi as the most inspiring composers, Narong hopes to leave his footprint in musical history even after his death. “If you die but your music stands, you’re not really dying.”

The Intimacy of Creativity: Narong Prangcharoen