Artists Behind the scenes
In Touch with Michael MacLeod – A Gypsy in the Arts
by Jenny Lee September 14th, 2011 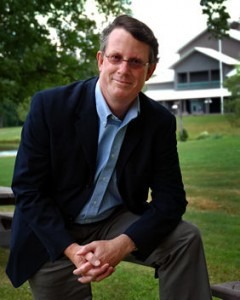 When I first met Michael in a concert, I thought I saw Sir John Eliot Gardiner. Both are tall, charismatic, and have a sense of authority when speaking. It was until later which I found out that Michael was, indeed, the General Manager of Sir Gardiner’s various ensembles. Son of a British diplomat, Michael MacLeod was born in Bogota Colombia, then lived in Turkey, Austria, the US, Ethiopia, Mozambique, Angola and France. Now, he is making Hong Kong his home. Being the newly appointed Chief Executive of the Hong Kong Philharmonic Orchestra, Michael is given perhaps one of the most challenging tasks in his post – identifying the orchestra’s next Music Director after Edo de Waart.

J: Would you consider yourself as an adventurer in the world?

M: That comes from my parents; my father’s a British diplomat and my mother’s an adventurer. They met and married in Japan, then they went to live in Indonesia where my brother was born. He is now married to a Corsican and works for the Indo-Chinese Bank in Marseille. My parents then moved to Bogota, Colombia where my sister was born. She is married to a Japanese Karate teacher and lives very close to where the earthquake was. I was born in Bogota as well, and lived in various places. After Ethiopia, I went to a boarding school in Scotland and met Tony Blair who was a year younger. I went to university in the US, then came back to Britian. And, if you are with a successful orchestra, you are always on tour, like that of John Eliot. I felt I was either moved around by my parents or travelling around the world with orchestras and choirs. I just develop a method of making the most of wherever I am and adapting to the circumstance. As my mother would often say to me, ‘life is not a rehearsal, you don’t get a second chance’, so just make the most of it.

J: How can the Hong Kong Philharmonic be benefited from your diverse background?

M: It’s a two way traffic. I would like to think that with my background, I can give them a managerial expertise that I hope would lead to the development of the orchestra. For example, they haven’t made a single recording in 8 years, so I am going to fix that. Apart from a trip or two in China, I don’t think they have been on tour for almost 10 years, so I am trying to fix that too. Also, I would want to make the concerts as interesting as possible. The world has changed. I don’t think you can any longer in just to have overture, concerto and symphony. You have to bring something extra to the table. I worked for John Eliot for 12 years, but I also ran the City of London Festival for 5 years. That was not just classical music, it was jazz, theatre, film. So I am trying to bring innovative ideas to the programming, things which can complement the music. For example, if we are playing Holst’s Planet, maybe we can have images of relevant planets moving slowly across the ceiling or maybe we can work in tandem with the Space Museum which is next door to the concert hall, so that 250 people can go to see a special show at the Space Museum before hearing the concert. Or we can have telescopes so that people can look at the night sky. The advantage of the Hong Kong Philharmonic Orchestra is that the HK Government provides almost 60% of the annual budget and it is building a large cultural complex, the West Kowloon Cultural District. Where else in the world is that happening? So, I regard Hong Kong as the new land of opportunity.

J: Did you study music in university?

M: I did on the side, but I studied history, concentrating on Medieval history. I always have a wide interest and my latest thing is to read through the complete plays by Shakespeare. I am not a religious person at all, but the last thing I did before coming to Hong Kong was to read the Bible.

J: Managing an orchestra requires a lot of energy, do you do much sport?

M: Throughout my life, two things have dominated it – one is music, and the other is sport. When I was a school boy in Scotland, I did the longjump for the Scottish schoolboys against England, Ireland and Wales. I played 1st 15 rugby and 1st 11 field hockey for my school. Then in America, I was voted as an outstanding athlete for both soccer and athletic. When I was working in Britian, I rode a pedal-bicycle from London to the Outer Hebrides listening to Wagner’s Ring Cycle. It took me three weeks and it was one of the most exciting things in my life. Although I hate going for walks, I climbed the tallest mountain in Britain, Ben Nevis, then I did Mount Fuji in Japan, and finally Kilimanjaro. I took up boating when I got the job at Glimmerglass Opera because it was on the edge of a lake. I am also keen on golf.