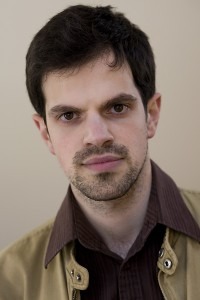 Karlo Margetić would like to thank fellow composer, Jack Body, for ordering him to apply to the Intimacy of Creativity 2013, because if his friend hadn’t, Karlo would have missed out on what he described as a “fantastic opportunity”.

Born in 1987 in Sarajevo in what is now Bosnia and Herzegovina, Karlo’s family moved to New Zealand to escape the Yugoslav wars when he was seven-years old. His musical talent was evident from the moment he picked up the recorder, and he hasn’t looked back since, winning numerous prizes in composition along the way.

With the third edition of IC a mere month away, Karlo shares with us his experiences, his music, and what he hopes to take from the upcoming event.

When did you realize you had a passion for composition?

When I was about twelve. I’d been playing the clarinet for a few years and had discovered the collection of scores and recordings at the Wellington public library, quite a nice collection actually for a non-specialised library. I absorbed it like a sponge, from Bach and Mozart to Lutoslawski and Ligeti and so on. Naturally, I had a go at writing music myself and never really stopped.

Apart from being an active performer and composer, what other activities are you involved in?

Right now, I work in administration at SOUNZ – the centre for New Zealand Music. I teach composition and theory on Saturday afternoons and I also co-direct the SMP Ensemble, a flexible group of musicians and composers in Wellington.

The most important thing I’ve learned from wearing all these different hats is how important it is to be practical. Or at the very least to try and make my ideas as possible to realise as I can, however difficult or unusual they may be. Experiencing what it’s like to conduct, perform, compose and administrate really gives you a sense of respect for what everyone does and I think that’s very important.

Do you have a mentor? What is the most important thing he/ she taught you?

There are actually many people, too many to name, who have taught me useful things, given me brilliant ideas, or wonderful opportunities. I’m a bit of a nightmare student though, always off doing my own thing, so having a formal mentor as such is a bit unworkable. I try to learn as much as I can from everybody, be they my professors, my colleagues or somebody sitting next to me on the bus. Special mention has to go to Debbie Rawson, my clarinet teacher for many years, who persevered despite me regularly bringing in new compositions to show her instead of practicing my scales!

Why did you apply for IC 2013 and what do you hope to gain from the workshop?

I applied because it looked like a fantastic opportunity! I hope to make some new friends, have some good, in-depth discussions and debates, to discover Hong Kong (I’ve never been there before) and to collaborate with some outstanding musicians.

One of the reasons why Bright Sheng created IC was to bridge the gap between performers and composers. Do you feel that you do not have enough opportunities to connect with performers?

Personally, I do have a lot of contact with performers. As a clarinettist, I’ve been in various orchestras and chamber groups from my early teens, so talking to performers was never a problem for me. However, I often see a concerning disconnect, filled with misconceptions, between composers and performers – we are all musicians after all. Anything that can be done to reunite the two disciplines can only be a good thing.

Can you tell us a bit more about Svitac? When did you write it? Has it been premiered before? What was the inspiration behind it?

I wrote Svitac in 2009 at the request of clarinettist Ellen Deverall. I premiered it in May that year. The origin of the piece is a microtonal trill figure that I improvised one day. It’s the basic building block of the whole piece. The combination of clarinet and piano is a rather problematic one for many reasons, so I wanted to see if I could make the two instruments blend better. My solution was to completely negate the percussive nature of the piano by writing for an upright with a practice pedal so that the sound is transformed into a wash for the clarinet to sit on. The result was quite luminous and strange and reminded me of bioluminescence, so I gave it the title Svitac, which means firefly in Bosnian. It turned out that it wasn’t absolutely necessary to have an upright piano and actually in large halls a grand is preferable.

Ellen is a friend from University. When she was studying in the UK she asked me to write her a piece. Most of my pieces are written at the suggestion of performers and I like to acknowledge that.

During the concert, you will be performing your own piece. Have you worked with Mr. Nolan Pearson before?

No, I haven’t. I’ve played Svitac with four different pianists so far and each one has brought something new and interesting to the slightly unorthodox piano part. I’m really looking forward to collaborating with Nolan on this piece.

Apart from IC 2013, what other plans do you have for the year?

Hopefully I’ll be writing a new string quartet and a large orchestral piece, but exact details have not been finalised yet. My group, the SMP Ensemble is planning some very interesting concerts this year and I’ll be helping put those together.