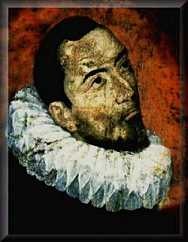 The brutal slaughter of Maria d’Avalos and her lover Don Fabrizio Carafa at the hands of Don Carlo Gesualdo was not exclusively motivated by jealousy. In fact, Italian noblemen during the later stages of the Renaissance were essentially duty-bound to kill their unfaithful wives. These types of honor killings were hardly ever prosecuted and never went to trial. However, it was the shocking brutality of these murders that triggered, or rather exacerbated Don Gesualdo’s rapid descent into mental illness. Consumed by guilt and hoping to atone for his actions, Gesualdo built a monastery that housed an elaborate chapel. Furthermore, he commissioned a large oil painting that depicted — for everybody to see — the corpses of Maria, her lover and the dead child, flanked by the wicked uncle Don Giulio and himself. Yet, within a couple short years, Gesualdo was once again part of an arranged marriage.

In 1594, Duke Alfonso II d’Este of Ferrara was desperately looking for an heir to prevent his estate passing back to the Papacy. As such, he proposed that his cousin, Eleonora d’Este should marry Don Carlo Gesualdo. Don Carlo had never met Eleonora d’Este before, and he probably could have cared less, but this marriage would gain him access to one of the most progressive and active musical centers in all of Europe. Duke Alfonso II was fanatical about music, and had hired Torquato Tasso as the court poet and Luzzasco Luzzaschi as the court composer. In addition, the court had one of the finest collections of musical instruments and much of the day was spent making music. Most significantly, the court was also home to the “concerto delle donne” (consort of ladies), an ensemble of professional female singers known for their technical and artistic virtuosity. Founded by the duke, this ensemble not only revolutionized the role of women in professional music, it was quickly imitated at other Italian courts. And so it happened, that in February 1594 amongst courtly and musical splendors, Carlo Gesualdo wed Eleonora d’Este at the court of Ferrara. The marriage, or rather the elaborate musical environment in Ferrara appeared to have had a calming effect on Don Carlo’s mental condition. Within the same year, he published 2 books of Madrigals, setting poems by Giovanni Battista Guarini, Alessandro Gatti and Torquato Tasso, and he is supposed to have written music for the “concerte delle donne” as well. In due course, Gesualdo published two more books of five-part madrigals in 1595 and 1596, respectively. In 1597, Don Carlo returned to his own estate and in imitation of the musical practices at Ferrara, established his private musical court.


Gesualdo’s newly found musical facility, however, did not have a positive effect on his second marriage. He quickly engaged in numerous affairs, most notably a love triangle involving Aurelia, Polisandra and himself. Eleonora, who had just given birth to a son, was not willing to stand idly by, and ordered both women to be tried for witchcraft. The official court documents asserted that Aurelia made Don Carlo drink her menstrual blood as a purgative. After the court obtained confessions by torture, both Aurelia and Polisandra were found guilty. Instead of being executed, however, both women were imprisoned in Gesualdo’s castle so that Don Carlo might continue to enjoy the simultaneous company of both women. By 1600, Eleonora had given birth to her second child, however, the infant died within days. Presumably, Don Carlo assigned the blame to Eleonora as he began to systematically beat his wife. Concurrently, he had himself beaten by up to ten servants daily. Unable to relieve his bowls, he even hired a special servant whose sole duty it was to beat him “at stool”. For obvious reasons, Eleonora filed for divorce on several occasions, but years of abuse had taught her to accept learned helplessness and she always returned to her husband. Mercifully, Don Carlos died at the age of 47 in 1613, and his most notoriously chromatic and expressive compositions like the “Tenebrae Responsoria”—a set of madrigals on sacred texts—were written shortly before his death. Although Gesualdo’s turbulent life provided inspiration to various poets and playwrights, his eccentric music settings were soon forgotten. It was left to Igor Stravinsky in the 20th century to rediscover Gesualdo’s unique mode of musical expression. Stravinsky even visited Gesualdo’s hometown and castle, and in due course orchestrated and completed some of Gesualdo’s works.