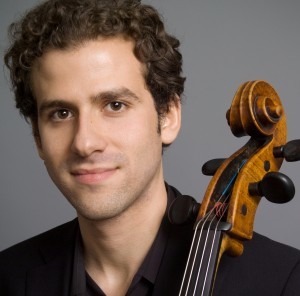 Nicholas Canellakis makes his Hong Kong debut this month, performing Mendelssohn, Schumann, and Brett Dean. Ahead of his first concert, I catch up with him and learn about his childhood, teaching and the interplay of music and acting in his life.

Nicholas started on the piano aged five, and moved to the cello at seven. His dad was a conductor, and Nicholas often saw him at work with orchestras in his native New York.

‘I was crazy about music before I picked the cello. When I was three I was loving my dad’s orchestra concerts,’ he enthuses. Nicholas remembers hearing a piece on the radio as a child – after asking his dad to name the piece, his father kept quiet and let him work it out for himself. The piece was the Dvořák cello concerto, and it’s stayed in his memory ever since. ‘That was my first ‘I’m recognising a theme’ moment, but I was already hooked on the cello by then. I can even remember the specific place where I recognised the theme of the Dvořák.’

Growing up, Nicholas was immersed in music. Another discipline which piqued his curiosity was that of acting, something he now pursues in his spare time.

‘I’ve always had an interest in it. I would say it goes way back to childhood, the same way that music does. I come from a family of musicians and it was very natural to pursue music – I ended up going to conservatory for music, and while music is my first love, there was this other creative tendency of mine that I didn’t have training for but always wanted to explore, so I just started trying to do it on my own in whatever way I could. It ended up becoming these little interviews.’ 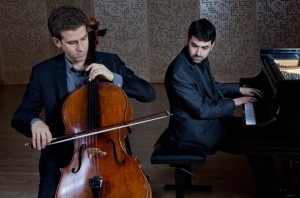 The tried and tested format of the satirical interview is something Nicholas thought would be funny to try in the classical music world. And they’re a hit; Nicholas worked his way up to interviewing (and insulting) performers including Leon Fleisher, Yuja Wang, and Itzhak Perlman.

None of the episodes are written – everything’s improvised. ‘If they were scripted and acted they wouldn’t be the same,’ Nicholas explains. ‘The idea’s not to act at all. I come up with some questions ahead of time, and I never tell the guests anything, but then most of it just goes from there.’

Nicholas had a lot of fun making these videos – is his music making a more serious endeavour?

‘I’ve thought a lot about this. I recently found a really wonderful acting teacher, and I found a lot of similarities between him and the best music teachers I’ve had. I think specifically of a man named Otto-Werner Mueller who was the orchestra conductor at Curtis, who was my watershed figure.

‘When I got there, I was seventeen, and I’d never come across someone who looked at music and approached the process like he did. And I started to feel similarly about this acting coach, and I realised how much similarity there is if you approach the process in the right way.

‘I’ve been able to find other means of joy in music through working on another art form, seeing how they’re similar, how acting and music are, at the end of the day, all about listening.

‘There are certain aspects of it where, when your passion is your job, you have to do it not always when you feel most passionate about it – that’s the nature of it. It’s easy to remain in a honeymoon phase with an art form if you’re not relying on it, so in that way I would say music is more serious. But I have been thinking about how to always treat it in the most joyful, fun, explorative way.’

Part of this exploration is embodied in Nicholas’s teaching, including in a masterclass he is giving as part of the Hong Kong Festival. For him, the focus is the big picture, rather than the small technical details that are often discussed in one-to-one lessons.

‘You always discover more about a piece when you’re teaching it to someone else than when you’re just practising by yourself. I like masterclasses because you can get into the concepts. I always like to get some big stuff in a masterclass, I find it a lot more interesting than ‘I think you should do a down bow there’ – and I think it’s more helpful for them.

‘If they’re only seeing you for half an hour you want them to come away with something they can remember, something that’s meaningful.’

Tickets for Nicholas’s concerts in Hong Kong can be found here.