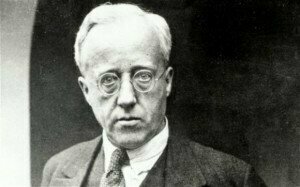 The Planets, a set of seven self-contained orchestral “mood pictures” portraying Earth’s neighbors in the solar system, propelled Gustav Holst to international prominence. However, this sudden fame came with a hefty price tag. Holst had always wanted to be just a simple composer, but suddenly he was in great demand at various social functions and the press was haunting him for endless interviews and public appearances. Publishers kept asking for revisions of his earlier pieces, and he conducted numerous concerts of his works. Exhausted, Holst fell from the podium while conducting at the University of Reading in February of 1923. “Every artist ought to pray that he may not be a success,” he wrote. “If he is a failure he stands a good chance of concentrating upon the best work of which he is capable.” Holst’s best work originated during a holiday in Majorca in the spring of 1913. His colleague Clifford Bax had introduced Holst to astrology, a subject that would take hold in the composer’s imagination. 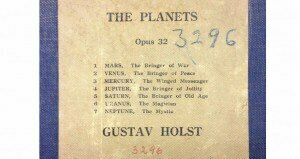 Holst worked on The Planets between 1914 and 1916, and initially scored the work for two pianos, four hands. “Neptune,” however was written for a single organ, as the sound of the piano was considered too percussive to portray a world as mysterious and distant. He subsequently scored the suite for full orchestra and wrote, “These pieces were suggested by the astrological significance of the planets. There is no program music in them, neither have they any connection with the deities of classical mythology bearing the same names. If any guide to the music is required, the subtitle of each piece will be found sufficient, especially if it used in a broad sense.” A private audience first heard the work at The Queen’s Hall in London on 29 September 1918, performed by the New Queen’s Hall Orchestra under the baton of Adrian Boult. The first public performance, omitting the “Venus” and “Neptune” movements took place on 22 November 1919 with the composer conducting. Finally, the London Symphony Orchestra under Albert Coates gave the first public performance of the complete work on 15 November 1920.