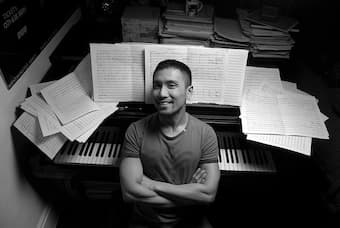 After what seemed like an eternity, the Hong Kong Philharmonic invites music lovers back into the concert hall for the 2021 season opening concert. Under the banner “Harbour A Love For Music,” Maestro Jaap van Zweden turns his interpretive focus on the music of Ludwig van Beethoven. Significantly, this inaugural concert opens with the world premiere of Old Bei by Raymond Yiu. Hong Kong born and London based, Yiu’s musical voice is prominently heard around the world, and Interlude wanted to know what prompted a fully trained engineer to take up composition as his main profession?

Yiu explained that he intuitively wanted to be a composer even before he studied engineering. After receiving a basic education in Hong Kong, he relocated to the UK and joined a choir and a jazz band. Essentially self-taught as a composer he studied various scores in his local library and accidentally discovered a CD with music by Lukas Foss. Having never heard anything like it, Foss’ music left him spellbound and opened up completely new vistas. In the event, Yiu’s early work received the advocacy of Foss, and Yiu engaged scholarly with Foss’ oeuvre. As we celebrate the centenary of Foss’ birth in 2020, according to Yiu, “there remains much to be discovered in the eclectic and distinctive expressions of the composer.” Above all, Yiu credits Foss for having helped him to discover his own voice as a composer.

Yiu’s music paints finely delineated portraits of humanity and addresses the role of the individual within. Embedded in that context is a search for identity and how it is culturally perceived. Interlude wanted to know how much of Yiu’s personal journey was part of his musical narrative?

“How long do you have?” Yiu asked. This question was actually the topic of his Ph.D. research. “For my first decade of writing music, I just picked up ideas,” he explained. “But then I suddenly realized that I didn’t really know who I was. Growing up in Hong Kong I never felt that the territory had a very strong musical heritage or tradition. I remember listening to Cantonese pop music, and that we were not encouraged to learn about Chinese traditional music. Suddenly, I realized that I didn’t have a tradition to fall back on. So that’s when I went on a journey of self-discovery and did research to try and find out about my musical heritage.” Yiu embraced the fact that he grew up on Cantonese pop music and traced its roots back to China in the 1920s. That led to an exploration of folk music in different geographic regions of China, and the process of writing his thesis helped to consolidate a number of highly personal strands—including American jazz. 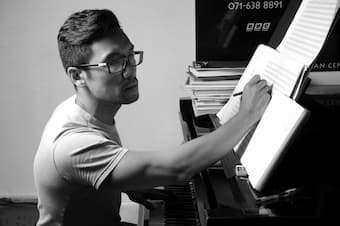 “This might surprise some people, but Beethoven wasn’t my favourite composer, Yiu explained; I find many of his piano works very bombastic, and they seem like short scores for orchestral music. But the symphonies are truly amazing, as Beethoven taught us how to use the orchestra. He made us consciously aware of acoustic pace, in terms of tempo and also in terms of contrast of dynamics. It is amazing how he develops entire movements from very short motives. We could almost call Beethoven the first minimalist in the way he uses small cells and ideas to generate an entire musical narrative. The interval of a third in the opening of his 5th symphony, and in “Old Bei” is almost like a crystal fragment. In “Old Bei” this very cell is refracted into different shapes and crystals and then put together again to make up the overall form. In all, Yiu uses quotations from 17 Beethoven compositions, including some famous ones but also from works that are not well known. It’s almost like Beethoven having a hallucination or being in a delirium, like people remembering things, but incorrectly.”

“We all bring different experiences to music, and for me, the emotional reaction is entirely left to the audience. I like the idea of memories, and of fragmentary memoires that allow us to make individual connections. Based on their personal, musical or cultural experiences, audiences are free to form their own association. When we trace the reception of Beethoven’s music in China, we find constantly changing meanings and associations. The quotations in “Old Bei” do carry meaning and expectations, but they are different for everyone. For me as a composer, I am particularly fascinated of how people react to my music.”

Predictably, during his anniversary year, Beethoven was ever-present. Is there something like too much Beethoven?

“I think we are all tired of hearing yet another Beethoven symphony cycle. Instead, we might take a closer look at his neglected pieces, at his intimate chamber and vocal music, for example. It is time to move away from Beethoven the god and superhero and discover the sonic poet. We need to look at Beethoven from a different angle, look at him as being human. Working on “Old Bei” made me think of Beethoven differently, and I tried to move away from the ever-present Beethoven surface of hearing the same pieces over and over. It was time to spend time with his other woks. It helped me to hear Beethoven differently, and I want to invite the audience to join me in this rediscovery.”

It’s a shame that you won’t be able to attend the world premiere of “Old Bei” in Hong Kong, but I am sure it will be a stellar success. What other projects are you working on at this time?

“Actually, right now I am writing an academic paper on transcultural composition. And I am also writing a violin concerto. All I want to say at this stage is that it has strong links to Chinese culture, and that it is based on the life of a Chinese violinist.”

“Old Bei” will be performed by the HKPhil on September 3rd and 4th .