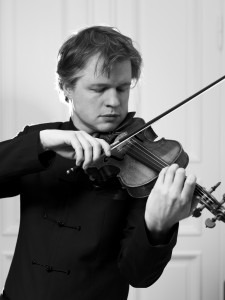 “Kraggerud must be counted among the world’s most interesting and accomplished stars.” – Cincinnati.com, November 2009

Norwegian violinist Henning Kraggerud is an artist of exquisite musicianship, who combines an unusually sweet tone and beauty of expression with impressive virtuosity, drawing audiences and critics alike towards the genuine quality of his playing.

After a triumphant debut with the London Philharmonic Orchestra under Osmo Vänska in 2010, Henning re-joins the conductor at the New World Symphony in the 11/12 season, as well as returning to the Cincinnati Orchestra and giving performances as soloist and conductor with the Pacific and Vancouver Symphony Orchestras.

The play/directing element of Henning’s career is fast developing as he proves his exceptional talent in this role; the current season sees a return to the Britten Sinfonia for a UK Tour, and concerts with the Basel Chamber Orchestra to include the Rheingau Festival. Henning also returns this season to the Geneva Chamber Orchestra where he curates a complete programme for violin and viola along with Ilya Gringolts and conductor David Greilsammer.

Henning’s highly-acclaimed recordings include Schubert’s Arpeggione Sonata and a disc of the complete unaccompanied Violin Sonatas by Ysaÿe, for which he received the prestigious Spellemann CD award and which he will perform this season at his recital debut in Tokyo.

Born in Oslo in 1973, Henning studied with Camilla Wicks and Emanuel Hurwitz. He is a recipient of Norway’s prestigious Grieg Prize and in 2007 was awarded both the Ole Bull Prize and the Sibelius Prize. Henning is a Professor at the Barratt Due Institute of Music in Oslo.
Henning Kraggerud plays on a 1744 Guarneri del Gesu, provided by Dextra Musica AS. This company is founded by Sparebankstiftelsen DnB NOR.
Credit : IMG Artists
Related videos: