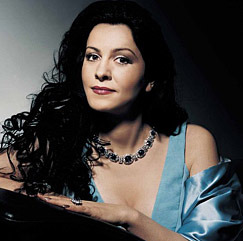 The name Angela Gheorghiu is synonymous with diva, opera, beauty, passion, and romance. Audiences across the globe wait for and cherish the opportunity to see her perform live in the opera theatre. She is an immediate draw and therefore a godsend for any fiscally concerned opera general director. Thus, it is no surprise that people have been showing up in droves to see and hear her in Puccini’s Tosca at San Francisco Opera.

As the opera’s heroine Floria Tosca, Miss Gheorghiu portrays a singing diva hell-bent on maintaining an upper hand in all her relationships. There is her tenor lover, the painter Mario Cavaradossi, a romance accentuated by her incessant jealousy. Tosca, a black-eyed brunette, can’t even allow her Mario to paint his rendering of blue-eyed blond Mary Magdalene, fearing the likeness to Lady Attavanti (an unseen character in the opera), an indication of infidelity. And here, perhaps in a brilliantly humorous scheme by the librettists Illica and Giacosa, Tosca has something of a point. The famously sad, farewell to the world tenor aria in act three “E lucevan le stelle”, never mentions Tosca by name. Puccini intoxicates us by the beautiful clarinet intro into a dream-like soundscape. Cavaradossi paints a pastoral picture with his words as if trying to capture a moment in time that only a painting can do. He laments and reminisces about an encounter with “She”, notice no names. This, possibly the most famous of all opera moments, is dramatically ambivalent. We, the audience, want to believe that he is saying farewell to Tosca, but perhaps more importantly to life itself. Tosca can never have her lover. She tries to control Cavaradossi, but ultimately her impulses lead to his execution.

Then there is the sadism of Tosca’s encounter with the antagonistic baritone Baron Scarpia. He will torture her lover Cavaradossi, in an insidious scheme to first find an escaped political prisoner than obtain sexual favors in return for the tenor’s freedom. Her mental fortitude finally succumbs to Cavaradossi’s shrieks of pain and Scarpia’s methods in the famous aria-lament “Vissi d’arte”. The mostly “why me, oh God” sentiment of her singing hides a plot to win back her lover’s freedom and eliminate his romantic opponent for her affections with one deadly swoop of a lethal weapon. Tosca can’t control Scarpia, therefore he must die and she will kill him. 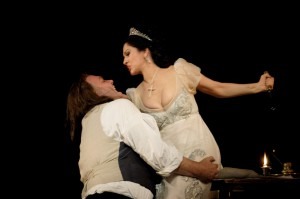 This is San Francisco Opera’s own production of Tosca designed by Thierry Bosquet and directed by Jose Maria Condemi, a local fixture and favorite. It is also a conceptual reimagination of the production first envisioned by Lotfi Mansouri (a theatrical director and past General Director) in 1997, which in itself harkens back to Armando Agnini’s Tosca that inaugurated War Memorial Opera House in 1932. It is therefore not surprising to present this production for the 80th anniversary of the San Francisco Opera’s opulent War Memorial Opera House.

Angela Gheorghiu is a visionary singing-actress. What little physical and vocal exuberance lost from previous years is turned into a more dramatic and seasoned product on stage. She is a true diva, perhaps a throwback to the times when singers gave it their all for the stage and audience. But as that, there is plenty of anecdotal information floating around. She arrived late in San Francisco right before the first costumed rehearsal on stage. And, during the artists’ first encounter with the orchestra, in a sit down and sing type of rehearsal, was seen snapping photos with her tenor counter part in front of the production sets.