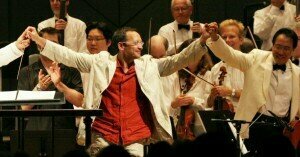 What do you get if one of classical music’s most beloved performers teams up with one of today’s most popular composers? It really is a no brainer, as Azul (the title means blue in Spanish) combines the collective imagination of composer Osvaldo Golijov and cellist Yo-Yo Ma. Commissioned by the Boston Symphony Orchestra and premiered on 4 August 2006, this finest cello concerto so far this century originated during the composer’s experiences in the Middle East around the summer of 2000. 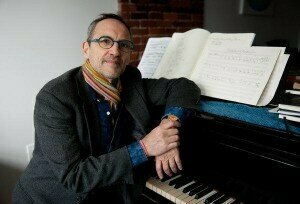 A renewed wave of violence enveloped the region, and when Golijov returned to New York he visited the Hayden Planetarium. “I saw one of those incredible space shows where you see views of the earth from above the International Space Station, and just was struck by this incredible planet that we live on and how beautiful it is from above and how in a way the topographical view, you don’t get that sense of all the struggles of life on the surface of our planet.” 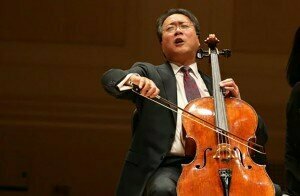 Golijov was born in Argentina to Eastern European Jews and educated in Israel before moving to the United States. His search for a truly global music perfectly resonated with the philosophies of Yo-Yo Ma, whose never-ending thirst for multi-cultural expressions is inspired by a vision that engages difference, sparking radical cultural collaborations and passion-driven learning to build a more hopeful world. Golijov’s music is predictably allusive, simultaneously invoking the baroque past and futuristic electronic music. It brings together musical influences from a period when Christians, Jews, and Arabs lived in peaceful coexistence, “with music flowing from three cultural streams into one.” Four connected movements, “Paz Sulfurica” (Sulfuric Peace), “Silencio,” “Transit,” and “Yrushalem” (Jerusalem) include imagery from Pablo Neruda’s poem “The Heights of Macchu Picchu.” Golijov rewrote the work one year after the premiere, but it still took the recording industry the better part of a decade before finally releasing a recording in 2016.