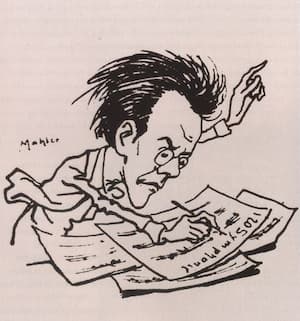 In his settings of songs from the von Armin and Bretano collection Das Knaben Wunderhorn, Mahler set the martial Der Schildwache Nachtlied (The Sentinel’s Night Song), which is the musing of a night guard. As everyone slumbers around him, he must keep awake and keep watch, and be mournful. A dialogue opens in his head with an admirer who urges him to join her in the rose garden, in the green clover. He protests that he cannot come because he has been posted, instead, to watch a garden of weapons. She wishes him well and tells him to believe in God’s blessing. He responds that God’s blessing is only for the king and he is very far away. He returns to his duties and replies to a question about ‘Who was singing’ with the mournful reply that it was only the solitary field sentinel singing at midnight.


Because we have two clear voices, that of the sentinel and an unnamed woman, some performances have split the song between 2 voices.


We have Mahler’s explicit directions, and the model of the first performance in 1893, that the song should be performed by a single male voice. By adding in the other voice, we move out of the sentinel’s dreams and into another kind of reality, where he’s not listening to his own desires, but those of an idealized other. The text also supports Mahler’s desire for a single singer in the closing words where in response to the challenge of who was singing, the sentinel replies: Verlorne Feldwacht | Sang es um Mitternacht (A solitary field sentinel was singing at midnight).

What does this do to the song when we add other characters? It takes this out of the realm of the imagination and pins it, rather too squarely, to the realm of memory. One commentator even decried these duo performances as being “cutesy.”

We know those long hours after midnight when there’s no one around and yet we have a duty to stay up. Our imagination fills the empty world around us with ideas and characters, all of whom speak in our voice. This is another case of listening to the composer and not making interpretations he hasn’t permitted. We lose the world of imagination and replace it with something far less creative.