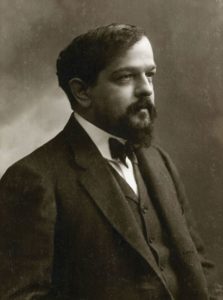 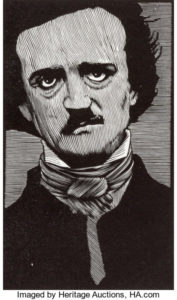 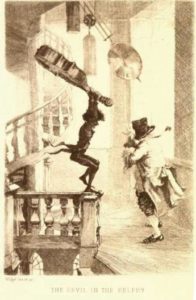 The Devil, in the belfry, attacking the belfry-man with his big fiddle

Le Diable dans le beffroi, a comic opera, was started after Pelléas in 1902 and abandoned around 1912. In Poe’s short story, published in 1893, the residents of Vondervotteimittiss (wonder-what-time-it-is) have their well-ordered life thrown into an uproar by the arrival of a devil who attacks the bell tower that regulates everyone’s life. He attacks the belfry man with his big bass fiddle and then, to the horror of the good Dutch townfolk, has the clock strike 13. And at the end, the devil sits on the top of belfry, jerking the bell rope and making the bell sound while playing, ‘out of all time and tune… “Judy O’Flannagan and Paddy O’Raferty.”’

The work was completed in 2012 by English musicologist Robert Orledge. Debussy’s original plan was to have the voiceless Devil’s solo part whistled and played on the violin, while the rest of the voices would come from the townspeople’s chorus. In this track, the Devil strikes 13! 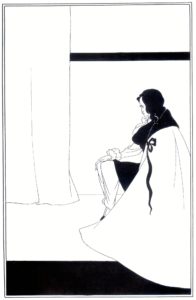 Aubrey Beardsley: The Fall of the House of Usher illustration

Debussy’s work on the opera began with the scenario, using Baudelaire’s translation of the short story, completed in 1903. Aside from a few sketches and his notes in the scenario, only a few measures of the opera were finalized. His work was interrupted by La Mer, the ballet Khamma, and his incidental music to D’Annunzio’s Le Martyre de Saint Sébastien, and he finally gave up the project entirely in 1912.

La Chute de la maison Usher, unlike the comic devil, was a work of pure gothic horror – the brother who falls into cataleptic trances, the sister who has been entombed alive, and our poor narrator, who comes to help and can only flee in horror at the end as the house collapses on the corpses of the Usher siblings. 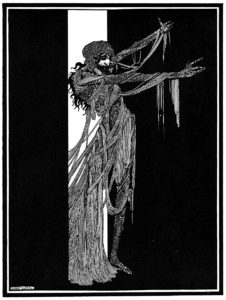 Debussy’s work on Usher was ultimately incomplete, but there are three versions of the libretto, the last of which contains Debussy’s notes on the orchestration. Debussy, writing to his publisher, said he wanted to imbue the work with an ‘alluring musty scent.’ Taking time from La Mer, to work on the Poe projects, Debussy wrote “I have let myself stray and have almost only been working on Roderick Usher and the devil in the belfry. […] I fall sleep with them and find on waking the gloomy melancholy of the one or the derisive laughter of the other” (21 September 1909).

In the final scene, Roderick sees his sister, Madeleine, who has finally escaped from her tomb under the house, advancing towards him through the hallway. He reproaches himself for her situation but notes in horror that she’s still coming towards him, with her bleeding hands, and dress covered with blood. She mounts the stairs, he hears her steps, she’s behind the door! She collapses on her brother, and, as they die together, their friend flees. The house of Usher falls, overseen by a blood-red moon. 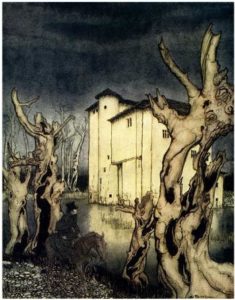 Arthur Rackham: The House of Usher

Usher was completed in 2006 by Robert Orledge.

The two short works were intended to be performed together, with the premiere intended for the Metropolitan Opera in New York. Pelléas et Mélisande had its debut at the Manhattan Opera House in 1908 to great acclaim and the Met rushed to secure Debussy’s next opera. The Poe works were intended to fill that desire. Before his death in 1918, Debussy had contractual confirmation that the two works would only be performed consecutively. The ‘mocking laughter’ of Devil would be countered by the ‘gloomy melancholy’ of Usher. Debussy did not live to complete either work.