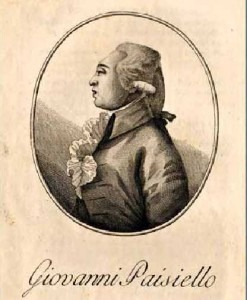 The comic opera Il barbiere di Siviglia (The Barber of Seville) became Giovanni Paisiello’s greatest success. Composed and first staged during Paisiello’s tenure at the court in St. Petersburg, the opera swept like wildfire through European theaters. Between 1783 and 1804 it received nearly 100 performances, including a rare 1801 staging in New Orleans on the North American continent. Based on a play of the same name by Pierre Beaumarchais and versified by Giuseppe Petrosellini, Paisiello’s “Barber” employs simple harmonies and imaginative orchestration to perfectly suit the characters. These skillful characterizations combined with gracefully warm melodic writing to usher in a new era for Italian opera. It’s immediate influence on the works of Mozart and Rossini should not be underestimated. It certainly turned Paisiello into one of the leading composers of the late 18th century.

Giovanni Paisiello: The Barber of Seville, Act 1
Initially, Paisiello made his name with a number of “Intermezzi.” This subspecies of opera buffa was not performed between the acts of a serious opera, but represents a stand-alone light opera. These works featured a greatly reduced cast, generally limited to four protagonists. Intermezzi were divided into two parts framed by an orchestral introduction and featured a number of ensemble pieces counterbalanced by a chain of arias. After composing a number of buffo comedies, Paisiello composed his Le finte contesse (The fake Countess) for the Valle Theatre in Rome in 1766. The libretto is by an unknown author and tells the story of Count Tulipano, a widowed nobleman obsessed with extending his bloodline. He tries to get his son Giorgino, a rebellious young man tired of the rigid life in the palace, to marry. The intended bride is a Countess called Olimpia, who hails from Vallepiano. However, two country girls seize upon Tulipano’s obsession and turn the delicate situation to their own advantage.

Giovanni Paisiello: Le finte contesse (The fake Countess), Act 1
Giovanni Paisiello is foremost bound to the history of 18th century opera. However, he also wrote eight keyboard concertos at various points throughout his career. It is commonly assumed that Paisiello did not write these concertos with the intention of performing them himself, but that they emerged on commission from noble or generous clients. The vast majority of his concertos are articulated and simply settings that are not conditioned by operatic compositions. Cast with Italian aristocratic lightness, they feature graceful melodies and a mixture of timbres that follow a typical gallant style structure. However, the G-minor concerto is special. It immediately strikes a more serious tone, and the remarkable second movement bristles with intense chromaticisms and adventuresome harmonies. Aristocratic lightness and joviality are cast aside in favor of a solemn form of expression that steadily points to the works of the young Beethoven.

Giovanni Paisiello: Piano Concerto No. 4 in G minor
Paisiello’s vocal style was not particularly concerned with virtuosity. Rather, he preferred the elegiac, sentimental and soft patterns of a smooth, light and elegant vocality. His principle aim was to involve the audience in the character’s events on an emotional level. Delicate and gentle, his melodies are meditative, innocent and often lulling, and graciously backed by woodwinds. Above all, Paisiello’s melodies express grace and innocence, and always give the expression of extreme naturalness. In his opera Nina, composed in 1786, Paisiello relied on the expressive formulae of the Italian vocal style at the end of the 18th century that foreshadowed the great heroines of the Romantic melodrama.