It is not clear when Giaochino Rossini and Olympe Pélissier first met, but by 1832 they were undoubtedly in a relationship. He had departed for Paris in 1830 and had left his wife Isabella Colbran unceremoniously behind. She was an attractive woman in her 30’s, with a decidedly colorful history in Parisian society. Rossini suffered from violent mood swings and a number of debilitating health issues, and was in need of someone to take care of his mental, physical, and domestic needs on a daily basis. Olympe Louise Alexandrine Descuilliers grew up in the house of her stepfather Joseph Pélissier, whose name she took. At the tender age of 14 she was sent out into the world to continue her mother’s “career path” of finding a collection of “wealthy protectors.” Not everybody was overjoyed to find a new woman in Rossini’s life, and Édouard Robert dubbed Olympe “Mme Rabatjoie No. 2 (The Second Mrs. Spoilsport).” However, Rossini clearly expressed his feelings in the cantata for voice and piano Giovanna d’Arco, which he dedicated to Olympe.

Olympe had briefly been the mistress of the painter Horace Vernet, who used her as the model in his Judith et Holophernes. The young Honoré de Balzac considered her “the most beautiful courtesan in Paris,” and even proposed marriage. When he was turned down, he wrote her into his famous novel La Peau de chagrin, portraying her as “physically opulent, sexually chilly, snobbish and insecure, yet possessing a strange inner warmth and private serenity.” At least part of Balzac’s characterization appears to have been spot on, as Olympe once wrote, “I am neither proud nor gracious. I am a fat woman who is occupied from morning to evening with digesting. I no longer know what sex I am.” As she subsequently communicated, “we are unwell from eating too much…the Maestro and I live to eat and we acquit ourselves of this duty religiously.” Given her less-than-respectable background, rather awkward situations arose when Rossini introduced Olympe into elite social circles. When Rossini had Olympe act as hostess at a number of musical soirees he presented in Milan during the late 1830’s, Countess Marie d’Agoult remarked, “women of standing in polite society stayed away from them.” 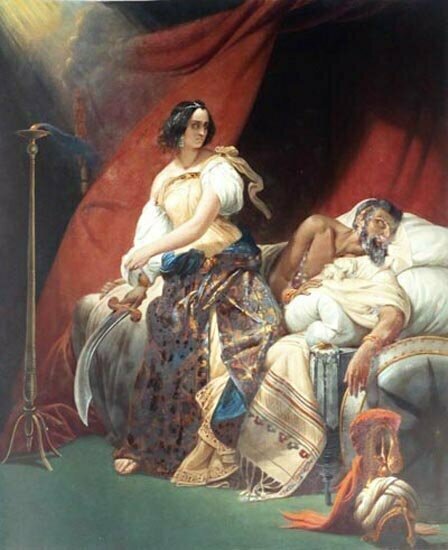 Rossini and Pélissier lived together as man and wife without being married, and they certainly became stabilizing influences on each other. She tirelessly nursed him through long periods of physical and mental illness, more a second mother than a would-be wife. Marriage, of course, was not an option as long as Isabella lived in retirement. Rossini had continued to financially support his wife, and when he received news in 1845 that Colbran was on her deathbed, he and Olympe traveled to her villa at Castenaso to pay their respects. Isabella had seen little of her husband since their formal separation eight years earlier, and she died on 7 October 1845 allegedly murmuring Rossini’s name. Ten months later Rossini and Olympe married, which proved to be the happy prelude to several years of decided misery. Rossini admitted that he was incapable of dressing without help, and that conversation became difficult. He even talked of suicide, but claimed that he was too cowardly to take the final step. For up to eight months of each year, Rossini combatted his weakened state with ineffective cures. 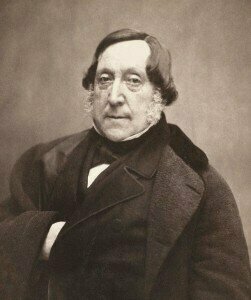 Rossini hit rock bottom in 1855, and unable to sleep for more than five minutes at a time for over a year, he said, “Death is better than living this way.” Olympe decided that Rossini should return to Paris to receive medical treatments, which they did in 1855. Gradually regaining some semblance of normality, Rossini composed a piano prelude and six songs for voice and piano entitled “Musique Anodine” in 1856. In his dedication he writes, “I offer these modest songs to my dear wife Olympe as a simple testimonial of gratitude for the affectionate, intelligent care of which she was prodigal during my overlong and terrible illness.” During the last years of his life, Rossini and Olympe held weekly musical events on Saturday evenings. Everybody in Paris was looking for an invitation, and the last “Samedi soir” was held in September 1868. Rossini died a few months later, on Friday the 13th of November. Olympe remained in their Paris residence for another decade until her death at the age of 81.