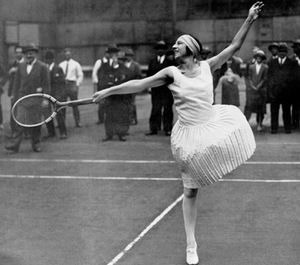 Who really knows what inspires the creative mind? It might be a painting of a moonlit lake, a craggy alpine peak, or the ferocious ocean pounding the rocky shores of a remote island. Of course, there is the ever-popular poem and book, a discussion among friends, the portrait of a beloved, or maybe even a distinctive memory? Yet at the end of the day, artists tend to be inspired by what they see everyday. To the observant mind, the incongruity and folly of human existence are a variable treasure trove of inspiration. Take the game of tennis for example. On one hand it is all about pushing a little ball over a net to determine the eventual winner. For the spectator, however, it is also about seeing fit, young and athletic bodies gyrating in seemingly effortless and animated motion, and all that in full public view! In 2017 this hardly causes much of a stir, but it was all the risqué rage in 1910 Paris.

It was actually down to Suzanne Lenglen to popularize the women’s game in a way that had not been done before. Her flamboyant nature—she rather liked her daily dose of brandy—and her dazzling and free flowing play wowed spectators. She dominated the women’s game and won 31 Championship titles throughout her career. However, she also got rid of the sport’s archaic dress code, and was not afraid to show a bit of leg and bare her arms. Much impressed, the impresario Serge Diaghilev and his famous Ballets Russes, with help from the choreographer Vaslav Nijinsky, devised an original scenario that incorporated the game of tennis. The set painter Jacques-Emile Blanche reports, “There should be no corps de ballet, no ensembles, no variations… only boys and girls in flannels and rhythmic movements… a game of tennis was to be interrupted by the crashing of an airplane.” 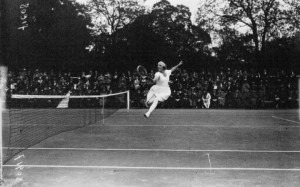 Since the ballet needed a musical score, they invited Claude Debussy for a sumptuous luncheon. Debussy was not really in the mood, yet years of illness and debt had put him in dire financial straights. He was forced to take on conducting duties, to which he was not really well suited, and took up commissions with little or no enthusiasm. Debussy found the tennis/plane crash scenario absurd, so Diaghilev doubled the fee and removed the airplane. In the end, they agreed on the following scenario: “The scene is a garden at dusk; a tennis ball has been lost; a young man and two girls are searching for it. The artificial light of the large electric lamps suggests the idea of childish play: they play hide and seek, they quarrel. The night is warm, the sky is bathed in a pale light; they embrace. This spell is broken when another tennis ball mysteriously appears. Surprised and alarmed, the young man and the girls disappear into the nocturnal depths of the garden.” 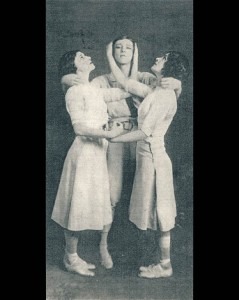 Despite his initial hesitation, Debussy drafted his score for Jeux in less than 4 weeks! He refused to let Diaghilev and Nijinsky hear his work in progress, “not wishing these barbarians to poke their noses into my experiments in personal chemistry!” His caution was well founded, as he later complained that Nijinsky “with his cruel and barbarous choreography trampled my poor rhythms underfoot like weed.” In his score, Debussy never uses formal procedures to create unity and integration, but rather explores the idea of discontinuity. The music is in constant flux and a full palette of instrumental color creates an almost invisible coherence. As a commentator once suggested, “Analyzing Jeux is like trying to capture wisps of mist.” Jeux is probably the least known, and least frequently performed of Debussy’s orchestral works. For one, it had the misfortune of being premiered on 15 May 1913, less than two weeks before the notorious premiere of Stravinsky’s Le sacre du printemps. Pierre Boulez described Jeux as “The Afternoon of a faun in sports clothes,” suggesting that Debussy played a very special kind of game indeed!