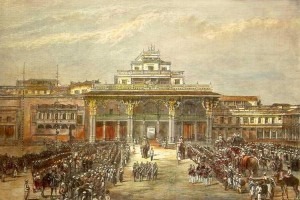 In the mid-19th century, a great many French musicians were forced to leave their homeland and seek their fortunes elsewhere, sometimes far from Europe. Many of these were refugees from the events of the Third French Revolution of 1848, which ended the Restoration of the French Monarchy and began the Second Republic, which in turn ended when Napoléon the Third was named Emperor in 1852. Some of these individuals were criminals in addition to being talented musicians and were fleeing justice. Many musicians left because they had debts and could be placed in prison for non-payment. Others simply were flying the unrest and the violence. Music is a difficult profession during times of revolution.

With so many free spirits with questionable morals traveling around the World on ships, some of these musicians had great semantic adventures which sometimes ended in tragedy. For example, the French Harp virtuoso Nicolas-Charles Bochsa, who after being named professor of Harp at the Royal Academy in London, was unmasked as a forger. He then ran away with the wife of the composer Henry Rowley Bishop (author of “Home Sweet Home”!) to Australia, where he died suddenly and was buried. These adventurous spirits are intriguing and sometimes even mysterious.

One of the most enigmatic figures of this period was Ali Ben Sou Alle, who was born Charles-Valentin Soualle in 1820 in Arras, France. After receiving his first prize in Clarinet at the Paris Conservatory in 1844 he served as the director of music of The French Marine Band in Senegal, and then was named first clarinet solo at the Opéra-Comique in Paris. After the Revolution of 1848, Soualle was forced to flee France to England where he settled in London, playing in the Orchestra of the Queen’s Theatre. His songs (in English) and piano pieces were published in London. 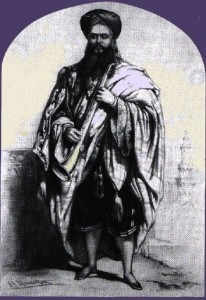 While in London, Soualle met another exiled French musician, Louis Antoine Jullien, who conducted a light music series in London. Jullien encouraged Soualle to take up the saxophone, and after modifying the instrument by adding a single octave mechanism (the modern system used today) and keys for the lower register (calling his modified saxophone the “turcophone”), Soualle became known as a virtuoso and began touring, performing solo recitals (or mono-concerts, as they were called at the time). He performed in all the European capitals and then traveled to Australia, New Zealand, Manila, Java, and through China.

When he arrived in India, where he settled in Mysore, he apparently became the director of the Royal Music for the Maharajah. At least, this was the story that began circulating in the French newspapers around 1864. It was during this period that he converted to Islam and changed his name to Ali ben Sou Alle (or “Ali, son of Soualle”), also wearing the “traditional“ uniform of Mysore and adopting manners he claimed were those of his adopted country. He subsequently traveled to Ile Maurice, to French Polynesia, the Cape of Natal and the Cape of Good Hope. Soualle returned to Mysore and was almost killed in the Indian Rebellion of 1857.

Around 1860, Soualle returned to France for health reasons and began publishing his own music. On March 27 1865, he performed a command performance for the Emperor Napoleon III at the Tuileries Palace in the presence of the entire Imperial Family. There was also a command performance for the Prince Of Wales in London, where Soualle presented the Prince with a bound copy of his works specially printed for the occasion (now in the National Library in London). In 1866, we find traces of him touring in the French provinces for various events. It would seem, however, that the fall of Napoléon the III and the rise of the Third Republic in 1870 had an adverse effect on his fortunes, as they did for so many musicians and artists.

Among his published works (which contain fantasies on operas of the time, light dance musical works such as polkas and waltzes and other character pieces), there was a series of works which are called “Souvenirs of ___” which seem to be more a record of Soualle’s concert activities, rather than descriptive of each place. “Souvenirs de L’Inde”(dedicated to “His Excellence the Governor Lord Harris”) is typical of these works: beginning with a “bel canto” style aria, followed by what Soualle referred to as a “Thème Malabar” treated as a theme and variation, and then a brilliant “polonaise” ends the work. It would appear that Soualle had a very good pianist in Mysore to accompany him, as the piano part for this work is more soloistic than in many of the other works in the series.

In 1875, there is an article in “Le Figaro“ announcing that Soualle is opening an establishment on the rue Saint-Honoré in Paris, where he plans on using the skills he learned during his ordeal during the Indian Mutiny to treat patients using plants and massages. Beginning around 1880, the account of how Soualle was named Head of Military Music in Mysore was published in several French newspapers, but in a highly romanticized form. Although he seems to have died around 1899, it would appear that he has become more of a legendary figure, rather than someone who is still performing.

The question needs to be asked: when Soualle said that he had been named Director of the Maharajah’s Military Band, was this in fact the truth? Or was this simply a story that he had made up in order to explain his name change, and his odd clothes and manners? Since the only sources for this story are in French newspapers which quote Mr. Soualle himself, it could be that he invented the story out of thin air. However, it may well be true, and he would be in the records of the Palace of Mysore, if he was indeed employed by the Maharajah.

Perhaps the mystery will be solved when pianist Raj Bhimani and António Carrilho, his colleague, perform an arrangement of “Souvenirs de L’Inde” for recorder and piano in India in during their tour in November and December. It does seem fitting that this music should return to the place that inspired it!

By Paul Wehage
This Article first appeared on Serenade Magazine on November 14, 2016.