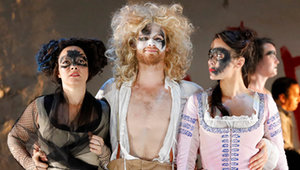 There was little to commend the new production of Mozart’s Don Giovanni at the Aix-en-Provence Festival 2017. The stage set lacked any recognizable theme, and the intermittently raised and dropped metallic curtains offered no discernible purpose. Ditto on the costumes that ranged from contemporary to period, to several that looked like they had been borrowed from the Carmen production down the road. The direction by Jean-François Sivadier was unmitigated chaos, driving the singers in a frenetic scurry around the stage throughout the performance. If the singers didn’t get a headache, the audience certainly did.

Chief irritant was Philip Sly in the title role. What the Canadian baritone lacked in the vocal department, he overcompensated for with androgynous histrionics. The ludicrous direction reached its apotheosis in the final scene where traditionally the unrepentant lothario is dragged away to the underworld by the avenging Commendatore. Sivadier knows better and has Don Giovanni strip to his underpants (and knee pads lest we forget he needs to kneel a lot), assume a Christ-like position – extended arms and long shaggy hair – and then go into a St. Vitus’ dance until he finally collapses. It’s Pasolini’s Christ meets Pirates of the Caribbeans, or put more bluntly, it’s a high school opera production crossed with a Benny Hill skit on fast forward. Visually, at least, Philip Sly has the figure to match an emaciated Christ, and he has the physical flexibility to swagger like Jack Sparrow. Unfortunately, he doesn’t have the vocal heft for Don Giovanni. 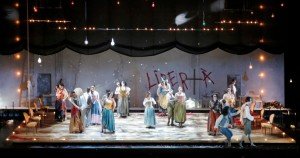 Neither did his Leporello, Nahuel di Piero. Though the Argentinean showed some promising moments, he lived up to few of them.

David Leigh’s Commendatore commanded neither the vocal presence nor the depth for this role, and the director did him no favors by having him appear in a cocktail suit at the fringe of the stage at various moments throughout the opera, when the script actually suggests that he is dead in his crypt.

Pavol Breslik, as Don Ottavio, was the only male singer who sang within his capabilities, demonstrating vocal beauty and astoundingly long breath. 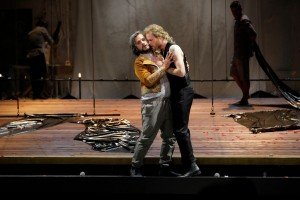 The women fared much better. Eleonora Buratto’s Donna Anna provided vocal and dramaturgic strength and was spared many of the indignities visited by the director on her colleagues. Isabelle Leonard offered a credible and likeable Donna Elvira, mastering the coloraturas with grace. Julie Fuchs sang a believable Zerlina.

Le Cercle de l’Harmonie, a fine orchestra usually associated with baroque music and period instruments, played with precision. Unfortunately, precision appeared to be their only objective; excitement and energy certainly weren’t. Jeremie Rhorer led the orchestra with a feather light touch and somniferous tempo. The treble heavy orchestra didn’t rise to any of the many dramatic opportunities presented in one of Mozart’s most exciting operas.

Though Aix has a history of excellent productions, this was not one of them and is better forgotten. What will not be forgotten is the back ache of this reviewer caused by the wooden jump seat that was sold as a normal seat.