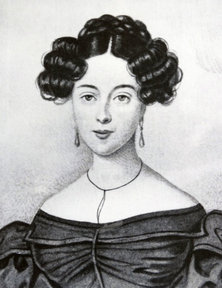 The memoirs of Franz Schubert’s friends are full of references to Caroline Esterházy. In fact, Eduard von Bauernfeld wrote in February 1828. “Schubert was, in fact, head over ears in love with one of his pupils, a young Countess Esterházy, to whom he also dedicated one of his most beautiful piano pieces, the Fantasie in F minor for pianoforte duet. In addition to his lessons there, he also visited the Count’s home, from time to time, under the aegis of his patron, the singer Vogl. On such occasions Schubert was quite content to take a back seat, to remain quietly by the side of his adored pupil, and to thrust love’s arrow ever deeper into his heart.” Bauernfeld even went so far as make reference to Schubert’s unrequited sentiments in the following verse:


In love with a Countess of youthful grace,
A pupil of Galt’s; in desperate case
Young Schubert surrenders himself to another,
And fain would avoid such affectionate pother 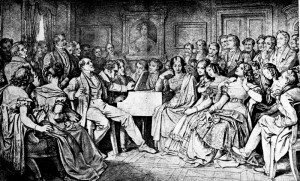 Countess Caroline Esterházy was the younger of two daughters of Johann Karl Count Esterházy of Galánta. According to contemporary reports, the “whole family was musical. The Count a bass, the Countess and her daughter Caroline sang alto, and the older Countess Marie delighted in a wonderful high soprano.” In the second half of 1818, at the invitation of Count Esterházy to tutor his two young daughters, and with a travel permit from the police, Schubert set off for Zseliz—presently called Zeliezovce. It was a small market town roughly 200 kilometers distant from Vienna where the Esterházy family had their summer residence. They maintained a Baroque palace with a central courtyard, and Schubert was charged to teach piano and singing to the two young Countesses, Marie aged 16 and Caroline aged 12. In addition, he was required to provide musical entertainment for the family and their guests.

Schubert received 75 florins a month, and in his letters to Vienna communicated his delight at being in the country, “Thank God, I live at last,” he wrote to his friends on 3 August 1818. Schubert also provided his friends with rather detailed descriptions of the palace and its staff. Apparently, he took a particular liking to the chambermaid Pepi Pockelhofer who he described as “very pretty and often my companion.” It is not clear whether Schubert had an affair with the chambermaid; Count Esterházy’s friend Karl von Schönstein certainly seems to have believed that he had. Be that as it may, Schubert was clearly homesick as he writes to his siblings, “my longing for Vienna grows daily. In the third week of November, Schubert returned to Vienna with the Esterházy family. 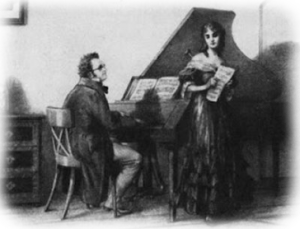 Schubert remained in touch with the Esterházy family and in May 1824 he returned to Zseliz for a second time. The terms and conditions were better than during his previous visit as he was paid 100 florins a month. Schubert stayed in one of the guest rooms in the main house and dined with the family. Apparently, he was rather lonely in the open countryside. He wrote to his friend Schober in late September, “Now I sit here alone in the depths of the Hungarian countryside where I unfortunately let myself be enticed a second time without having a single person with whom I could speak a sensible word.” However, it was not all gloom and doom. Countess Caroline had grown into a beautiful woman, and Karl von Schönstein writes in his later reminiscences “a poetic flame sprang up in Schubert’s heart for Caroline. This flame continued to burn until his death.” According to Schönstein, “Caroline had the greatest regard for him and for his talent but she did not return his love, although she surely must have been aware of his feelings.” Supposedly, she once reproached Schubert for having no composition dedicated to her, to which he replied, “What’s the point? Everything is dedicated to you anyway.” It is not entire clear whether his feelings for Caroline brought him joy or sadness, but he did dedicated his piano four hand Fantasie in F minor to her. It was written between January and April 1828 and published posthumously the following year. As countless critics and pianists have observed, “it is hardly fanciful to hear in the yearning central love duet an idealized expression of a relationship which social differences alone made impossible.”