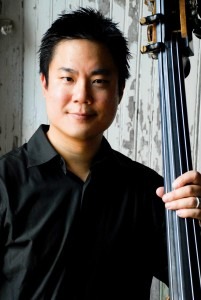 I have performed in Asia many times with the Cincinnati Symphony Orchestra as well as with other orchestras. However, our CSO tour to China this past March was also a deeply meaningful personal journey for me. Our CSO tour lasted two weeks, followed by two weeks of vacation. I decided to spend that vacation time working as Guest Principal Bass with the Shanghai Symphony Orchestra and Guangzhou Symphony Orchestra. In total, a month in China, the longest continuous period of time I have ever spent in my ancestral homeland. It was a wonderful experience to be able to spend such an extended amount of time there.

I was born in California and grew up there. My parents and my wife CiCi were born in China. The last time the Cincinnati Symphony Orchestra performed in Hong Kong was in 1966. I was not yet born. Hong Kong is where my parents as well as CiCi grew up. In 1966, my parents had just left Hong Kong to attend college in Berkeley and Tacoma. My in-laws, my brother, his family, and many of my uncles, aunts and cousins still live there, and CiCi and I visit often. 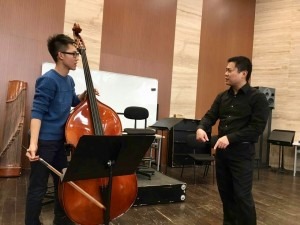 Hong Kong is like home to me. I worked for several weeks as Guest Principal Bass of the Hong Kong Philharmonic ten years ago. (My brother Vance is Assistant Principal Bassoon of that illustrious ensemble.) Performing in Hong Kong with my home orchestra the Cincinnati Symphony Orchestra was definitely a personal and professional highlight of my life.

It was so gratifying to find out that the concert has been sold out for weeks, and to see our Music Director Louis Langrée and our orchestra all over town in advertisements painted on Hong Kong trolleys. Ironically only a few of my family were able to come to the concert since it was sold out. How do you say “you snooze you lose” in Cantonese? 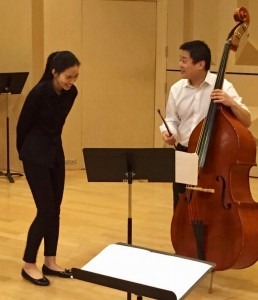 The audience response to our Hong Kong show was ecstatic. I and family and friends who were there had attended other concerts before at the Hong Kong Cultural Centre, but none of us had experienced a reaction as loud and enthusiastic as what we witnessed that evening. Four encores were demanded by the amazing audience.

Our next stop was Beijing. In addition to a CSO concert there, I and my fellow CSO principal players presented a chamber music concert and masterclasses at the prestigious Beijing Central Conservatory of Music. More roots, my wife attended Central Conservatory’s preschool and elementary school divisions as a child. She had a wonderful time that day reconnecting with some childhood schoolmates who are now professors at Central Conservatory.

I and my CSO colleagues were deeply impressed by the high level of the Central Conservatory students who played for us in masterclasses. I never thought I would have to translate my teacher Los Angeles Philharmonic Principal Bass Dennis Trembly’s advice into Mandarin; “Every swipe of rosin is worth five minutes of practice.” In Mandarin it goes “Mei ci ca song xiang denyu shi wu fen zhong lian qin.” (每次擦松香等於是五分鐘練琴). The humor was not lost in translation and the kids cracked up. 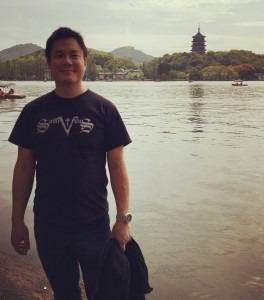 That evening our chamber music concert was played to a packed house at Central Conservatory. Program was Brahms Serenade No.1 in its original version for chamber ensemble, Poulenc Clarinet Sonata, and Shaposhnikov Sonata for Flute and Harp. Our venue was spectacular. It is in the courtyard of a palace that once belonged to the emperor’s brother many centuries ago, and has since become part of the Central Conservatory campus.

Next stop was cosmopolitan Shanghai where CiCi as well as my grandmother were born. Following two evenings of concerts there, the orchestra then travelled to Taiwan to play concerts in Tainan and Taipei as our alter ego the Cincinnati Pops Orchestra. In Taipei I taught a masterclass at National Taiwan Normal University and my very first music teacher came to see me teach music. So happy to reconnect with her, I had not seen her in 15 years since she moved to Taipei. I took piano lessons from Mrs. Hon in my hometown of Los Angeles from age 6 to 13. This was the foundation of my musical education and I never could have become a professional bassist without it.

After a week in Guangzhou, my last stop on this monthlong adventure was traveling back to Shanghai where I worked for a week as Guest Principal Bass of the mighty Shanghai Symphony Orchestra, Asia’s oldest orchestra. Founded in 1879, the Shanghai Symphony Orchestra is even older than the Cincinnati Symphony which was founded in 1895! I work with the Shanghai Symphony Orchestra every year and it was highly convenient to be able to piggyback this visit with the CSO tour. Program was Tchaikovsky First Symphony “Winter Dreams”, Liadov Enchanted Lake, and Ye Xiaogang Pipa Concerto with soloist Wu Man. Our conductor that week was Singapore Symphony Music Director Lan Shui. Maestro Shui is an absolute poet of a conductor. A soul surfer of a person and musician, he emanates kindness and warmth.

On a free day from the Shanghai Symphony, my wife and I took a day trip to Hangzhou. I have been to China many times, but this was my first opportunity to venture out of the major cities and explore this ancient gem of a city whose lovely West Lake for centuries inspired imperial gardens all across Asia. The week following my return to Cincinnati, the CSO performed Mahler’s “Song of the Earth.” The text of this music is famously based on the verses of poets Li Bai, Meng Haoran and Wang Wei. (By the way, Haoran is my Chinese name.) Those Tang Dynasty poets were profoundly influenced by the beauty of Hangzhou. To have that place fresh in my mind as I played the Mahler made those concerts especially touching.

This summer, the CSO is touring again, this time to Europe. Our European festivals tour will start in the U.K. with the Edinburgh International Festival and the BBC Proms before we move on to Spain, Belgium, the Netherlands and France. To me, international cultural exchange makes the world a smaller, more interconnected place and reminds us all that we are one people.

About our guest contributor: Owen Lee
One of the most prominent double bassists of Chinese descent, Owen Lee has been Principal Bass of the Cincinnati Symphony Orchestra since 1996, and has served as guest principal bass of many orchestras in Asia. Also a noted teacher, he teaches at University of Cincinnati CCM and in the summers at Chautauqua Music School. He has taught masterclasses worldwide, including Beijing Central Conservatory of Music, Shanghai Conservatory of Music and Hong Kong APA.